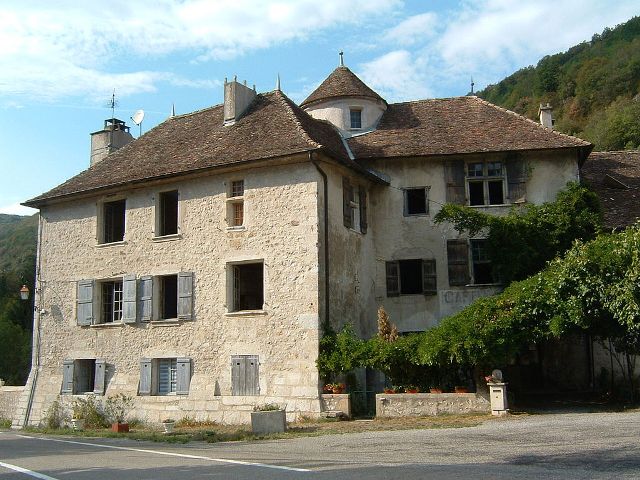 Location: Rossillon, in the Ain departement of France (Rhone-Alpes Region).
Built: 1398.
Condition: In good condition.
Ownership / Access: Privately owned.
Notes: Manoir de La Forest or Castle of Rossillon is a mansion of the very end of the fourteenth century that stands in the town of Rossillon in the department of Ain and the Rhône-Alpes-Auvergne region. The mansion is the subject of a registration as historical monuments by order of 5 September 2005.In Cluse Hospitals, the village of Rossillon, played a major role in the history of Savoy States. At the entrance, you can see on the left a house of the fourteenth century, built by the family of La Forest. This massive building, the powerful buttresses, still looks great and is being restored. Flanked by a square tower, she met various fates, jail in the nineteenth century and Mounted Police barracks in the early twentieth century. To the right of the mansion, on an esplanade, stands the church, in good condition, restored and enlarged at the same time by the Lords of the Forest. At 100 m above overlooking Rossillon and parade, we see an imposing rock topped by a statue of the Virgin, site of the former Castle Rossillon, which it remains meager traces.The lord of charge Savoie was very sought after in the Middle Ages and was only granted to the first nobility in recognition of services rendered to the war, to the court, or in embassies. Squire dispensed justice, administered and governed in the name of the prince. This "command" was for the lord, besides the wages he received, a source of various benefits, and gave him many rights. Moreover, the squire could appoint a vice-Chatelain and continue to perform his duties with the Prince. Now the manor of Rossillon by its extent, its strategic location to the steps of Savoy, and many parishes, was the largest in the Bugey during the period when the lords of La Forest were the holders; the fourteenth century to the early sixteenth century. Rossillon one could consider as the capital of Bugey and his squire or bailiff, as the highest dignitary of the province. Despite the current modest village of Rossillon, we know he was surrounded by fortifications which there remain some vestiges. In addition, the roles of lordship or accounts meticulously kept by the lords, shed light on the economic, administrative and legal Bailiwick of Rossillon. Following a fire that nearly destroyed Rossillon, the seat of the bailiffs Bugey was taken in Belley where he remained.Guillaume de La Forest, the Green Count page, squire of Count Red, Chamberlain and ambassador of the Duke Amédée VII, rebuilt the choir of the church where he was buried in 1440, and build a side chapel, where his weapons appear on the Keystone. It is succeeded by his son, John I of La Forest, buried in 1466 in the tomb of his father. It was he who erected the fortified house in 1398, seat of the Bailiwick of Rossillon, the entrance to the fortified town. Antoine de La Forest (1445-1499), lord of La Barre, Nice governor shows for saving the young Duke Philibert hands of the "Bold" and his brother Hugh, both son of the former, will share the manor up 'in 1509, when the death of Hugh. As Francis grabs the Bugey in 1536, it is still a La Forest, Philibert, lord of La Batie Albanians, grand-son of Hugh, which lends "fealty" to the King of France for its castellany Rossillon. From around 1550, the lord of offices fell into disfavor and were less exercised by the nobility.The manor of La Forest, dating from 1398, two floors above is served by a spiral staircase housed in a circular tower. The pieces, unchanged, retained their fireplaces and stone decorations fake camera. It is flanked by a dovecote situated in a square tower. The home form with outbuildings set in a U-shape, it is extended on one end by vaulted buildings. It was listed historical monuments September 5, 2005.