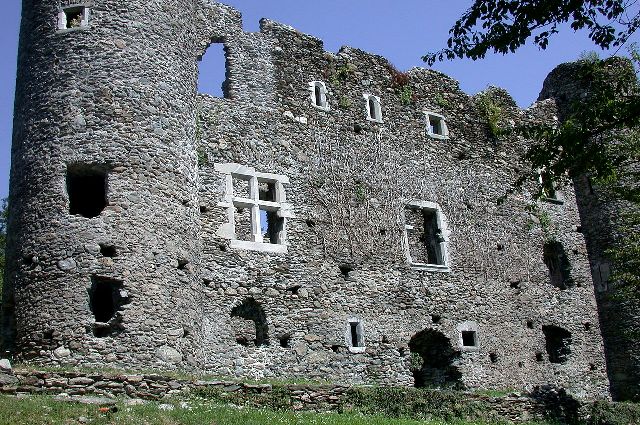 Location: Esserts-Blay, in the Savoie departement of France (Rhone-Alpes Region).
Built: 14th-17th century.
Condition: Ruins.
Ownership / Access: --
Notes: Manoir de Blay is an old fortress, rebuilt in the late fourteenth century or early fifteenth century, the center of the Lordship of Blay, the ruins stand in the town of Esserts-Blay in the Savoie region Auvergne-Rhône-Alpes. The mansion is in the shape of a large square house of three floors on the ground floor of 21.60 x 7.00 meters, which consists of two longitudinal shear wall. It is flanked on the corners of three towers rondes7, except in the northwest corner. According to recent survey, this hypothetical fourth tower was never built and it was not raised ditch trace. Access to the fortified house, defended by loopholes, was to be originally from the northwest side, the one who disappeared. Manoir de Blay is built in small device made of rubble embedded in mortar of lime and sand and thick wall. On the ground floor was to the north, the raised kitchen, and south, the cellar and cellars. The first level of a ceiling height of 4.30 m housed the main floor with three rooms with fireplaces, a large hall, the Aula with an area of ​​160 m28. The second level above 3.80 m devolved to the rooms to the number of five or six. The last level correspondand to attics, was up 2.50 m. Levels was served by a straight staircase from a piece northwest. The home is lit by windows that the inside has a low arch and mentoring done in stone. Two windows have double mullion. A door with an ogee arch suggests a realignment occurred in the late fifteenth and sixteenth centuries. The protruding turrets flanking him on its three corners are four stories high. Their summit was crowned with a crenellated parapet. She was also drilled loopholes in Plantagenet type niches in low arch. They communicated with the house through a door on each floor. Latrines, located on the first and second floors of the north tower, mounted cantilevered on corbeaux9 are accessible from the bedroom. The south tower housed a pigeon. The ground floor and the first floor was vaulted. The Lord has Blay, away from his fortified house, a barn of a significant size, it measures 38 X 10 m along the Isere, one farmer has custody. In an inventory of 1677, it is described precisely. In the Middle Ages, the fortified house is supplied with water through a line of fir wood or "bourneaux" ing from the Bernard. The inhabitants of the village can come and draw water through a pin near the communal oven in exchange for pipe maintenance.