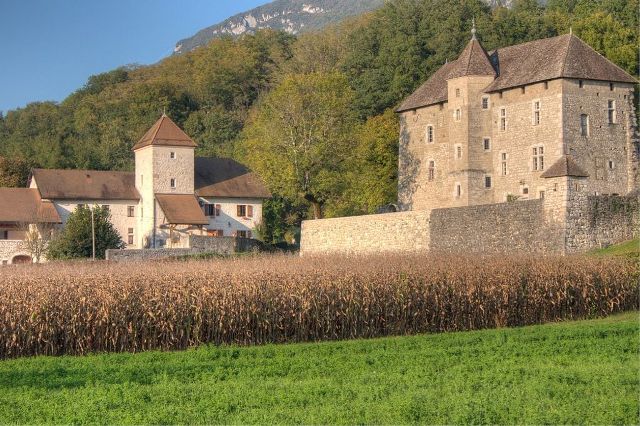 Location: Ruffieux, in the Savoie departement of France (Rhone-Alpes Region).
Built: 14th century.
Condition: In good condition.
Ownership / Access: Privately owned.
ISMH Reference Number: PA00118289
Notes: Château du Grand Mécoras or Castle Grand Mercoras, is a former stronghold of the fourteenth century, the medieval center of the Lordship of Mécoras, which stands on the town of Ruffieux, a French commune in the Savoie department in region Auvergne-Rhône-Alpes. Castle Mécoras, elevation and roof, are the subject of a partial inscription as historical monuments since November 6, 1969. The castle received the delegates 1991 Castle Mécoras, of the association of old French houses. The stronghold of the Grand Mécoras comes in the form of a quadrangular defensive enclosure to which we added a corner flag. It was reached on the north by a low door broken arch, once fortified. A committed polygonal tower at the center of the façade houses a spiral staircase. The turret has at its base a difference in thickness suggesting a redesign of the upper parts; its roof, cut sides, was restored in 1986. The main building of the fifteenth century, was increased in the early sixteenth century of a second building to the north, resting on the turret which has been at center of the current facade. A building, disappeared, was to occupy the southern part; it remains broken away and a door window transform. The stronghold is lit by mullioned windows. The main building has openings in the upper part of the defenses that open in a device assisées stone tuff and was probably replaced hoardings. Common, built in 1607, on the back of strong home, complete the set. The cover of the castle, like other buildings, is in plain tiles, clean roofs of the region. On tabulated Sardinian cadastre described the environment of this stronghold, "the yard, the barn, the stable, the garden but also the orchard, the vineyard and the chapel".