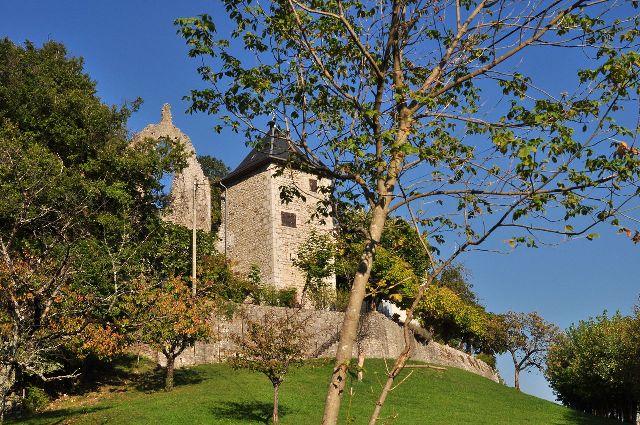 Location: Cruet, in the Savoie departement of France (Rhone-Alpes Region).
Built: 14th century.
Condition: In good condition.
Ownership / Access: --
Notes: The Maison forte du Chanay is a former stronghold of the late fourteenth century, in the Middle Ages, the center of the Lordship of Chanay, the remains of which stand in the town of Cruet, a French commune in the Savoie department in region Auvergne-Rhône-Alpes. The site was occupied very early; was found in the soil of a tumulus, a bronze sword from the period of Hallstat, dated 500 BC. AD .. The stronghold of Chanay with the castle of Verdun-Dessus and strong houses of the shore, and Chaffard, all located in the town of Cruet, constituted an important defensive set. It is the possession of the family of Poypon, related families of Verdon and Mouxy, with Antoine de Poypon which is the cause of the branch of Chanay, who lived in 1396. Francis Poypon says "Neplaz" or "Croso" in 1447 and "Chaneto" in 1484, husband of Mye Belletruche, is co-lord of the stronghold of Puygros (Puygros), it inherited. Succeed Peter said "Neplaz of Chaneto" Francis Belletruche († c. 1546), called "Poypon" Lord of Chanay and Raymond, lord of Chanay, it tests in 1589 and Andrew Lord of Chanay and Putteville (Trinidad), and in 1613 Raymond Poypon, called "Saint-Vial" nephew of Francis Belletruche, probably related to the Paernat family of Pallud. The stronghold was passed in 1697 to the family of Basin; Marie Paernat of Pallud, having brought through marriage. In 1730, the land registry, it appears the name of Sir Benedict Jérome Devilly absent on that date. The stronghold is in 1738 in undivided; it shares the rights with Beard Quintal, Marc Charbonneau widow. At the end of the nineteenth century, it is the possession of Baron Frantz Bourget, who made his summer residence. In 1917, date of death, we find Baron Clement Bourget. It was then acquired by Mr. Champenoix, Mayor of Cognin, then goes to Mr. Molin. The tower, square, probably from the late fourteenth, measuring 10 x 10 m square and thick walls at the base of 1.80 m. a modern house was attached to it. Part of the castle is in ruins.