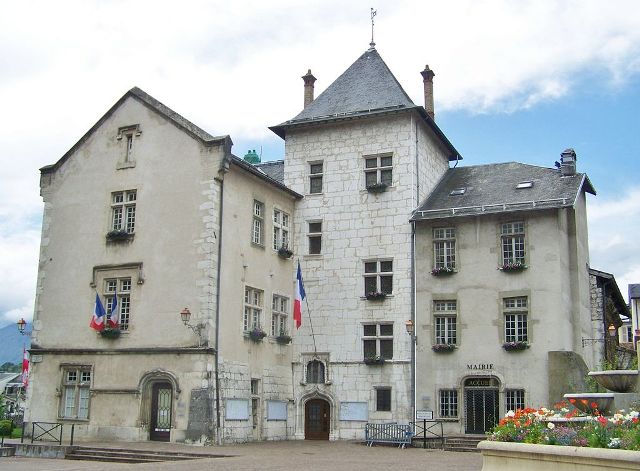 Location: Aix-les-Bains, in the Savoie departement of France (Rhone-Alpes Region).
Built: 16th century.
Condition: In good condition.
Ownership / Access: Owned by the municipality.
ISMH Reference Number: PA00118171
Notes: Hôtel de ville d'Aix-les-Bains or town hall of Aix-les-Bains, is a public building in France in the town of Aix-les-Bains, in the Savoie department in Auvergne -Rhône-Alpes which currently houses the utilities of the city and municipal officials of Aix-les-Bains. Erected as a castle in the sixteenth century, the Town Hall of Aix-les-Bains is now the subject of a classification as historical monuments since August 7, 1890 for the stairs, and since December 11, 1982 for the whole outside of the north wing. The town hall of Aix-les-Bains was once a feudal castle, built the Marquis d'Aix of the house of Seyssel on an axis linking Switzerland (Geneva) to Chambery. There is almost nothing left of the building from the Middle Ages, the main towers, probably of the thirteenth century, were demolished in the late nineteenth century. However, dating by dendrochronology the ceiling of the ground floor, used to date main building of the year 1400. As for the beautiful staircase, it was erected at the end of the sixteenth by Isabeau of Andy Roche (or Roche Chandry following text) at a time when the family Seyssel was at the height of his power, thanks to Claude de Seyssel. He lived in a very small chapel built on its top. The castle was bought by the town in 1866. The city changes the superficially enough to make his City Hall, opened in 1868. In 1890, the staircase is classified as historical monuments, which will be followed by a ranking of the 'whole building except the north wing in 1982. in October 2015, the mayor launched the total rehabilitation project from the roof of city Hall, in parallel with that of national baths. The cost of construction is approximately EUR 500 000.

How To Get To Hôtel de ville d'Aix-les-Bains (Map):