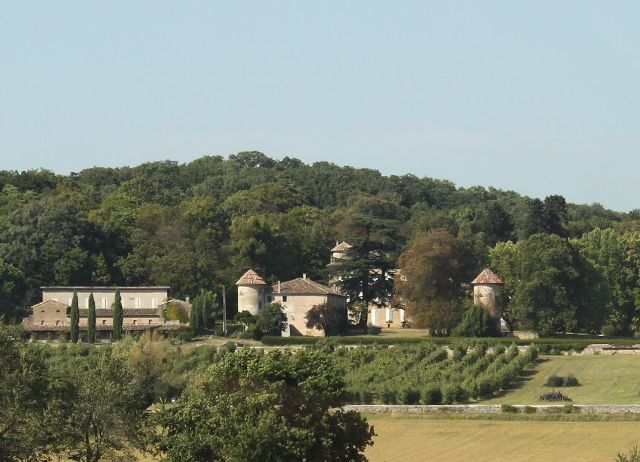 Location: Livron-sur-Drôme, in the Drôme departement of France (Rhone-Alpes Region).
Built: 12th century.
Condition: Ruined.
Ownership / Access: --.
Notes: Château La Rolière is a historic vineyard of the Rhone Valley, located in Livron in the Drôme, producer of Côtes du Rhône with the original mention Brézème.Located on the left bank of the Rhone, the castle was built in 1572 by La Rolière Lancelin and its vineyard planted in 1824 by Armand Blanc-Montbrun, an agronomist. Around 1830, he sold his wort merchants of Saint-Péray who developed sparkling wines. The agronomist died in 1849, leaving his heirs a "beautiful walled vineyard" and the "old historic mansion." In 1860, in the Drôme, appeared a pamphlet about the Clos de la Rolière, on the Côte du Rhône. One of the wines presented in Paris, during the Universal Exhibition of 1855, as the French sherry was rewarded and received a medal. But the diploma signed by the hand of Louis Napoleon Bonaparte specified that it was a dry white wine from the Côtes du Rhône. The vineyards planted in full in 1975 in the eight hectares of enclosed, became the property of the Marchal family a year later. The eleven children of this family and their descendants still own. Patrick Hauthuille, an architect who has participated in the development plans of the Basilica of Our Lady of Peace in Yamoussoukro, also an artist, wrote and illustrated On the Côtes du Rhône: the area of ​​the Rolière.

How To Get To Château La Rolière (Map):