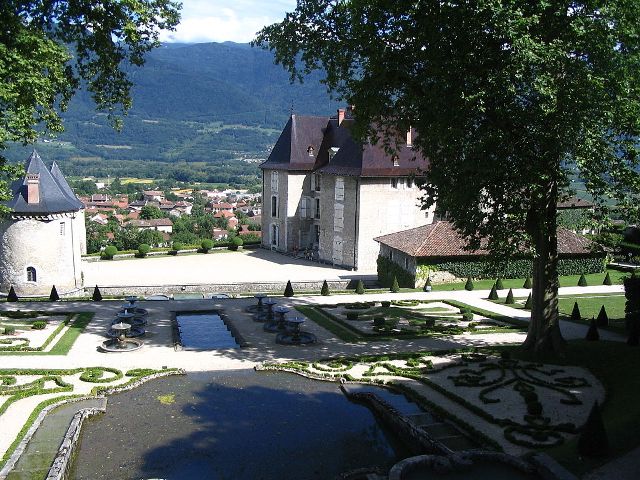 Location: Touvet (Le), in the Isère departement of France (Rhone-Alpes Region).
Built: 13th-18th century.
Condition: In good condition.
Ownership / Access: Privately owned.
ISMH Reference Number: PA00117296
Notes: Château du Touvet is a former castle of the thirteenth century, rebuilt several times that stands in the town of Touvet in the Isère department in Auvergne-Rhône-Alpes region. The whole castle including the Cordoba leather decorating one of the rooms, the remains of ancient fortifications and the park are the subject of a classification as a historic monument by decree of 16 November 1964. The stairs water is subject to a classification as a historic monument by decree of 17 March 1959. Private property, it is inhabited by the same family for over 500 years. The castle and gardens are open to the public, however.The castle Touvet was built in the thirteenth century by the d'Entremont family. There remains a main building. Guigues guiffrey, archer in the company of the Chevalier Bayard, acquired it in 1528. The castle then returned to the descendants of Guigues, the Marcieu. It is transformed into pleasure residence in the eighteenth century by Count Pierre de Marcieu who built a water staircase Italian, waterfalls and terraces to the French and enriches the interior decorations and furnishings today exposure.The French gardens designed by Letellier and Potin are classified as "remarkable gardens of France." Created in the eighteenth century and restored recently, water features and ponds alternate with box hedges.

How To Get To Château du Touvet (Map):