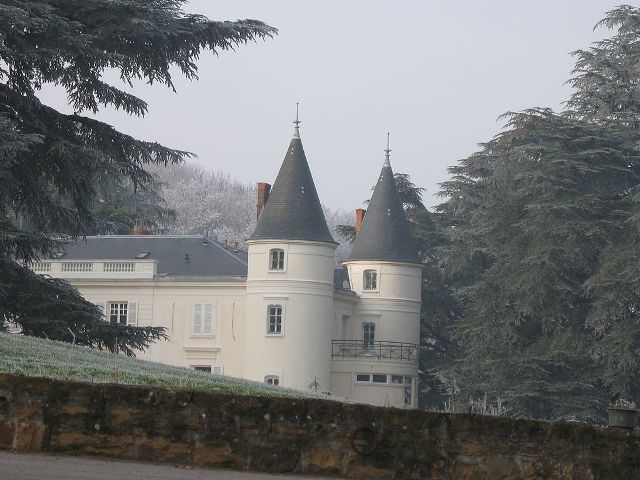 Location: Collonges-au-Mont-d'Or, in the Rhône departement of France (Rhone-Alpes Region).
Built: 18th century.
Condition: In good condition.
Ownership / Access: Housing complex.
Notes: The Château du Tourvéon is located in the town of Collonges-au-Mont-d'Or in the Metropolis of Lyon, while traversing hills, overlooking the Saône Valley. The earth is the home belonged to a merchant family of Italian spices, which provides advisors to Lyon from 1397 to 1517; William Tourvéon is obéancier Saint-Just and the Seneschal lieutenant in 1555; Mention is also made of Jacques Tourvéon. The first Tourvéon Castle was built around 1585 by Néry Tourvéon known to have exchanged various plots to "do carry water home." The family extinguished in 1671. In 1713, J. CROPPET, lord of Saint-Romain acquires the stronghold of Borghese then the field falls to Murard the eighteenth century which destroyed the old castle and built the present castle in 1854. Purchased by Emile Glaizal the early 1900s, it was sold by his daughter Genevieve Chastel in 1978 and taken over by a group of doctors wishing to make a whole complex fitness. The latter went bankrupt, the castle was taken over and turned into a residential complex in 2003. It was Jacques of Tourvéon draw that would have made the great tower of adobe and develop a pool fed by a fountain of Chat-owl. A coat of arms surmounting the door common proclaimed "lord of the tower and the Vivier". The present castle, which dates from the nineteenth century was built by Murard, who did develop the park designed by landscape Luizet. The door "Aquaria" (water works) recalls the destiny of this place under the sign of water, which was once destined to become thalassotherapy center. The area that extends over 25 hectares and the castle can not be visited.