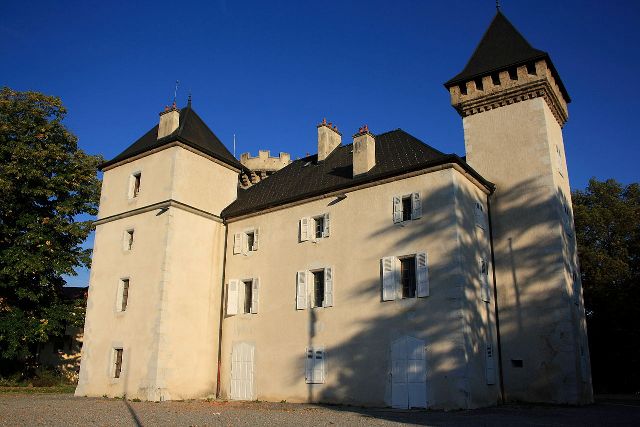 Location: La Roche-sur-Foron, in the Haute-Savoie departement of France (Rhone-Alpes Region).
Built: 12th century.
Condition: In good condition.
Ownership / Access: Privately owned.
Notes: Château du Saix is ​​a former stronghold of the twelfth century, which stands in the municipality of La Roche-sur-Foron in the Haute-Savoie region Auvergne-Rhône-Alpes. The castle is the subject of a partial registration under the Historic Monuments by order of 24 January 1944. Only the tower is registered. The fortress was built in the twelfth century by Jean du Saix. At its foot is one of the four gates of the first fortified wall of the Rock: the door "Saint-Martin", which it remains today only the arc. The first enclosure once enchemisait the castle Saix and that of the ladder right next, the precincts of the two houses were separated by another door door called "DOMPMARTIN" that still exists today. In the sixteenth century, the castle belongs to François-Prosper Geneva-Lullin, descendant of a bastard branch of the counts of Geneva, born of love of Count William III of Geneva and Emerald La Frasse. It is, in 1557, companion of Duke Emmanuel Philibert of Savoy at the Battle of Saint-Quentin. In 1597, the castle was bought by Antoine Saultier Balme, captain of the city of La Roche, whose family owns next to the church, a beautiful house that has been rebuilt to nine in 1571 and entered partially historical monuments in 1944. In 1626, Antoine Saultier Balme, sold the castle to Bernardine nuns, Reformed Cistercians, which make it a monastery. In 1670, Baron of the Tournette acquires and settles. It is ultimately in the early eighteenth century, the castle returns to Arestan family, former home of the bourgeoisie and this dress in La Roche-sur-Foron from the early seventeenth century, and which they still owns.