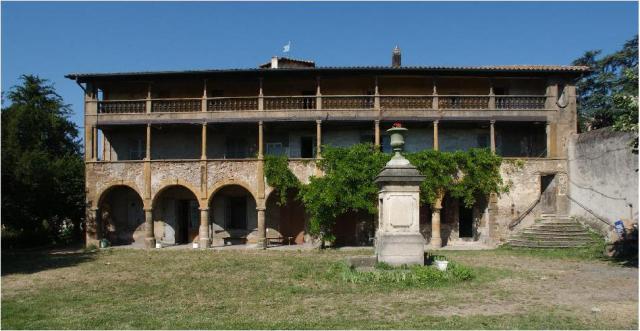 Location: Pierre-Bénite, in the Rhône departement of France (Rhone-Alpes Region).
Built: 16th century.
Condition: In good condition.
Ownership / Access: Privately owned.
ISMH Reference Number: PA00118014
Notes: Château du Petit Perron also called Maison des champs des Gondi following a historian Solomon's attribution error in 1936, is a castle located in the municipality of Pierre-Benite, in the city of Lyon, below the castle of the Grand Perron, which it shared a long history.The existence of land and property is attested to Perron from the late twelfth century. According Pitiot, William Rufus, canon of the Church of Lyons was thus in possession of a country house called "the front porch" of the parish of Oullins in 1187-1190 years. In 1220, this building is referred to as "barn" or in other words, a house surrounded by gardens or land. In the years 1520-1530, the hamlet of Perron has several housing types, dominated historically, geographically and socially by the area of ​​the Grand Perron, made around 1520 by Antoine Gondi, merchant of Italian origin. It is to Jean Camus, grocer native Auxonne that we must build the Petit Perron. Probably intimately linked to Antoine Gondi beside which he lived in Lyon, he bought in 1530 a "Grange" in the immediate vicinity of the Grand Perron and many lands just outside the field of Gondi. Between 1530 and 1566, deputy it a second building to the barn, the whole is regulated by the establishment of an Italian gallery or loggia in 1566. Jean Camus died in July 1568. The purchase in 1574, Antoine Camus, son of John, a last building body, helps give the building its final configuration. Alongside this transformation of places, other maneuvers undertaken by Antoine Camus to Petit Perron lordship worthy of the name. In 1575, Antoine Camus buys from Pierre Epinac, archbishop of Lyon, the census, served, and justice of the fief of Perron for the sum of 3000 pounds. Last act of a story that mix friendship and ambition, Antoine Camus bought the Grand Perron Albisse Del Bene in 1581. As of that date, all the rights of justice, privileges and other records are transferred to the Petit Grand Perron. In 1609, the Camus family sold the area of ​​Petit Perron William I of Balmes, secretary of the king in the chancellery of the Dauphiné, who married Anne of Sèves in 1608. The Camus family and Balmes lived near one of the other in Lyon, in the district of Change (current Gadagne Museum).