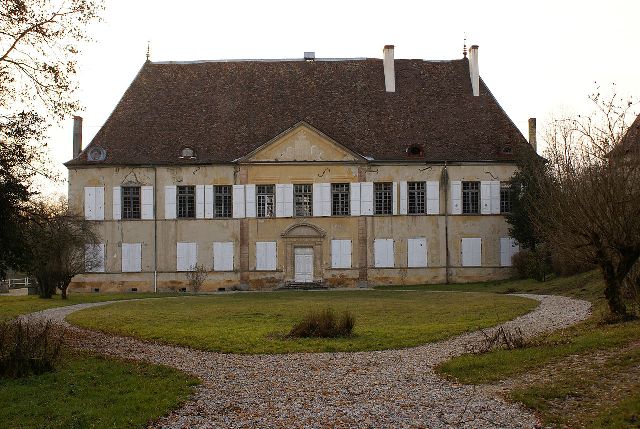 Location: Passage (Le), in the Isère departement of France (Rhone-Alpes Region).
Built: 15th-19th century.
Condition: In good condition.
Ownership / Access: Privately owned.
ISMH Reference Number: PA00117234
Notes: Château du Passage is a pleasure palace of the seventeenth century that included a former home of the fifteenth century, which stands on the town of Passage in the Isère department in Auvergne region Rhône-Alpes. Under the historical monument; facades and roofs as well as the billiard room and the former dining room of the ground floor with their decor and the chapel are the subject of a partial registration by order of 17 July 1972; the grand staircase to the cage, the two lounges and the ground floor room in the south wing with their decor are subject to a classification by order of 17 July 1972.Clermont In 1342 the family bought the land where the current building to build a strong house, which you can still see vestiges in the right wing of the castle. Following a trial with King Louis XI, the house was sold to the family of Poizieu which began in the year 1650 built the castle that can be admired today. In 1731, Joseph Gallien of Chabons who was counselor to the parliament of Grenoble bought the family's nephews residence and made many works that can still be seen, the grand staircase in the lobby, French ceilings in the kitchen and the remarkable woodwork of the eighteenth century. During the same century the castle has a chapel which has three marble altars and a balcony gallery for the servants. During the Revolution, the castle farm and its furniture is sold and it was not until 1818 that he found a buyer in the person of General Quiot who modernized it and scored on his seal. Many decorative elements changed and so the walls of the entrance hall and staircase decorated saw in the early nineteenth century trompe l'oeil with military emblems, all inserted in a frame in antique , faux marble wallpaper still in perfect condition and a billiard room of over 100 m2. Marie-Joséphine Piégay became owner of the castle in 1853 and it is now his great-great-grand-son, Thierry St-Romain who still holds the remains. Nowadays all over the castle the entire ground floor is open to visitors.Turripinoise located in the countryside, this house dauphinoise important on two levels, surrounded by moats of water amenities, has a huge roof, steep scaly tiles higher than the walls (9 meters to 11 meters walls roof ), and perfect symmetry. The eastern facade is very classic and always a rigorous geometry. The front door, surmounted by a large polychrome triangle dating from the eighteenth century, and its 21 windows overlooking the gardens and a hilly park of four hectares.