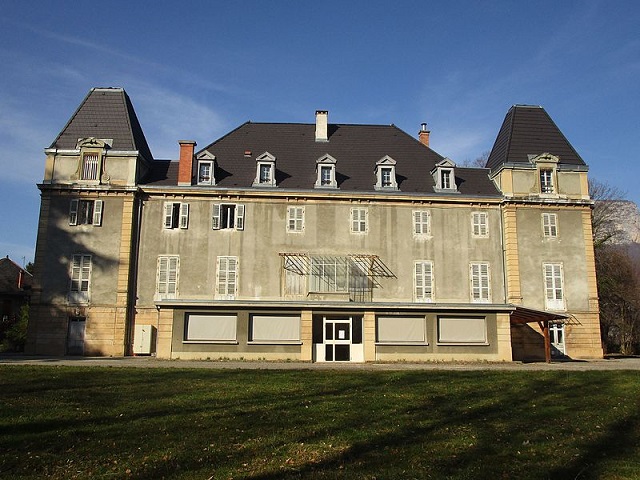 Location: La Ravoire, in the Ain departement of France (Rhone-Alpes Region).
Built: 19th century.
Condition: --.
Ownership / Access: Private property.
Notes: The castle of Charmilles is a nineteenth-century castle located in France in the commune of La Ravoire, in the department of Savoie in Auvergne-Rhone-Alps.The castle was built in the nineteenth century by Count Leon Costa de Beauregard in place of a residence that belonged to Jean François Bertrand de La Pérouse, who was extraordinary ambassador of Savoy in England in the thirteenth century. In 1933, the Costa de Beauregard family still owned the castle. Subsequently, this one is transformed into a private agricultural vocational college under the name of Lycée des Charmilles. In 2005, the Lycée des Charmilles merged with the Fondation du Bocage, owner of the Lycée du Bocage, located in Chambéry. In 2016, as part of a decennial global planning study, the board of directors of the Fondation du Bocage, noting that the castle is no longer in safety standards and that the costs of replacing it are too great , Decided to regroup its two sites in Chambéry, near the lycée du Bocage. Consequently, from the beginning of 2016, the courses insured on the site are transferred to a new building in the city center of Chambéry, near the second site of the Foundation. The castle is put up for sale and bought by a private developer.