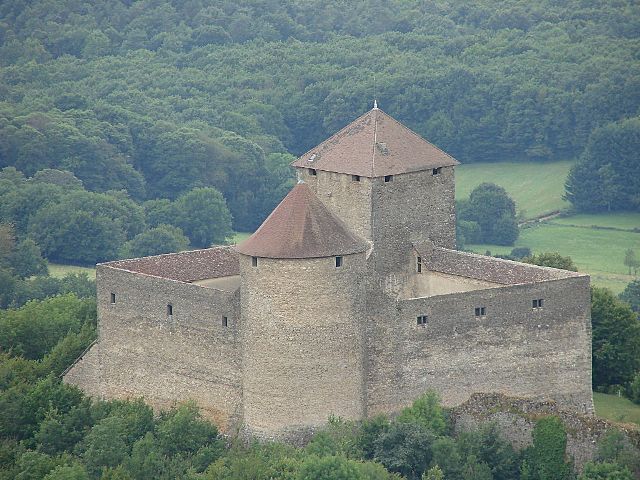 Location: Ambérieu-en-Bugey, in the Ain departement of France (Rhone-Alpes Region).
Built: 1310.
Condition: In good condition.
Ownership / Access: Privately owned.
ISMH Reference Number: PA00116288
Notes: The Château des Allymes is an ancient castle of the fourteenth century, rebuilt in the sixteenth century and restored in the nineteenth century, the center of the Lordship of Allymes, which stands Brey Hamlet Wind few kilometers from the hamlet Allymes of the town from Ambérieu-en-Bugey in the department of Ain, in region Auvergne-Rhône-Alpes. This is the only copy of a medieval fortress Bugey. As historical monuments; the castle is the subject of a classification by order of 20 July 1960; the ruins of the old outer enclosure are subject to a partial enrollment by order of 21 August 1967; the remains of the farmyard, the Barbican, the outer tower and north of the curtain are the subject of an order by ranking of 2 December 1993.The dwelling attached to the dungeon of the sixteenth century Gothic features a spiral staircase serving the floors. Alain Kersuzan coverage round paths and parapets are fanciful reconstructions of the nineteenth century. The castle is a monument Allymes visit and hosts shows and temporary exhibitions.

How To Get To Château des Allymes (Map):