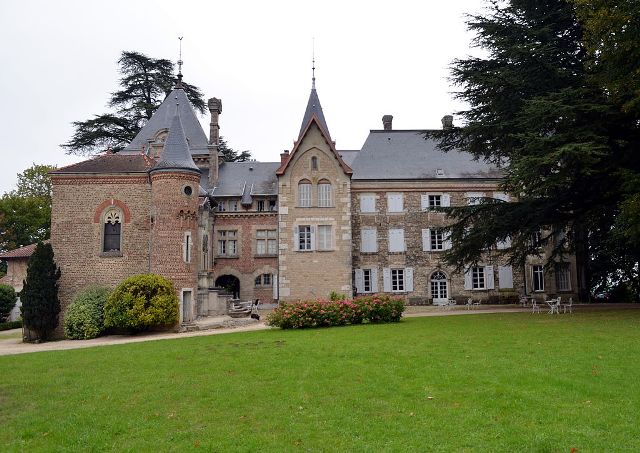 Location: Varambon, in the Ain departement of France (Rhone-Alpes Region).
Built: 18th-19th century.
Condition: In good condition.
Ownership / Access: Privately owned.
ISMH Reference Number: PA01000025
Notes: Château de Varambon is a castle of the eighteenth century remodeled in the nineteenth century that stands in the municipality of Varambon in the Ain department in the region Auvergne-Rhône-Alpes. It succeeded several high buildings on the site, a first castle erected around the year Mil Varambon by the Sire de la Palud and was the center of the Lordship of Varambon. The castle is the subject of a registration as a historic monument by order of 5 November 2007. The castle park is the subject of a pre-inventory the remarkable gardens.The original castle was built by the lord of La Palud to Varembon Year MIL4. Varembon This was perhaps the father of Pierre La Palud, knight, lord of Varambon 1150, father himself of Stephen, Gui and William of La Palud. The latter, provost of Fourvières, bequeathed in 1243 to Guy, his nephew, Canon of Lyons, possessions he has in the heritage land of his family. Ayme La Palud, son of Girard, great-grand-son of Pierre de la Palud, is recognized in 1300 by the abbot of Ambronay and in 1302 Humbert of Luyrieux Morestel Lord in Revermont, and by Robert Berard, tutor of Molissole temple, rights by the inhabitants of Varambon on pastures from River Ain.The Lordship of Varambon remain for more than five centuries in the family of La Palud. Jean de La Palud, Count de Varax, died Jan. 9, 1544, forward to his two daughters, Marie and Françoise, one wife of René, Count of Chalant, another wife of Ferdinand de Lannoy. Marie and Françoise de La Palud décédèrent leaving no children. Claude Rie, their mother gathered their rich estate and erected in marquisate by Duke Emmanuel Philibert of Savoy, March 9, 1576, the land of Varambon and its dependencies, it bequeaths, June 23, 1593, to Marc de Rie, his nephew. At the death of Francois de Rie, Marquis of Varambon, the king gives his marquisate to Gaspard de la Croix, Count of Castres, who gave it to Christine Claire Haraucourt, François widow of Rie, 1641. Ferdinand on May 24 Rie sells, June 3, 1655, to Pierre Perrachon, adviser to the king. March 20, 1756, Louis Guichard Perrachon heir quality of Jean-Baptiste-Marie Perrachon Nanteuil, his uncle, alienates Jean-François Balland of Augustebourg, esquire, lord of Courbonnet in Normandy in whose family it was still in 1789.The former castle of Varambon was razed in 1451 by order of Duke Louis of Savoy, who will then give 12 thousand crowns to rebuild. According to a count provided in 1603, the castle, rebuilt in the fifteenth century, was that "in a main building and two small towers without ditches or drawbridge. ". The town beneath was "closed by walls and two doors without drawbridge." In 1595, during the wars that preceded the conquest of Bresse by Biron, the castle and the village were ransacked. "Most of the houses and buildings of that village, has the same count, are ruined and burned and subjects almost all dead and those who remained, poor and miserable, fourteen in number." It will be again destroyed in 1595 and rebuilt in 1756 and restored in 1855. The present castle is the fourth building can be built at this location. The building is registered as historical monuments in 2007.

How To Get To Château de Varambon (Map):