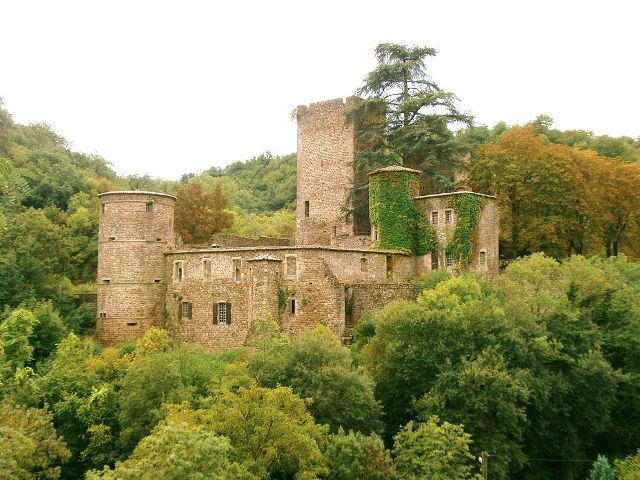 Location: Thorrenc, in the Ardèche departement of France (Rhone-Alpes Region).
Built: 13th-18th century.
Condition: In good condition.
Ownership / Access: Privately owned.
ISMH Reference Number: PA00116825
Notes: Château de Thorrenc is a castle Thorrenc in the department of Ardeche, France. This charming castle has three towers. The oldest seems to be the dungeon, a rectangular tower whose access is on the first floor. Only a few narrow openings and light inside. Stages thereof were fully planchéiés. It was built around 1360 by Cardinal Colombier, lord. The round tower southeast, with horizontal slits, dated fifteenth century. In this tower are dungeons. The third, more recent, dates from the early sixteenth century. Buildings backed the dungeon as a Renaissance main building. Another building was added or repaired at a more recent time the seventeenth century and eighteenth century. Seat of a barony, the castle's history dates back at least to 1025. After the Revolution, it belonged to annonéennes families Desfrançais of l'Olme, Bechetoille, Marthoret by inheritance and after a sale annonéennes Mignot and families of Lapize Sallée, it was inhabited, it seems, until around 1850 - 1860. Then it was gradually forgotten in the vegetation until mid-twentieth century. The remains were registered as historic monuments December 28, 19501. After another sale in 1964, it was restored and reoccupied. It changed hands several times since and can not be visited.