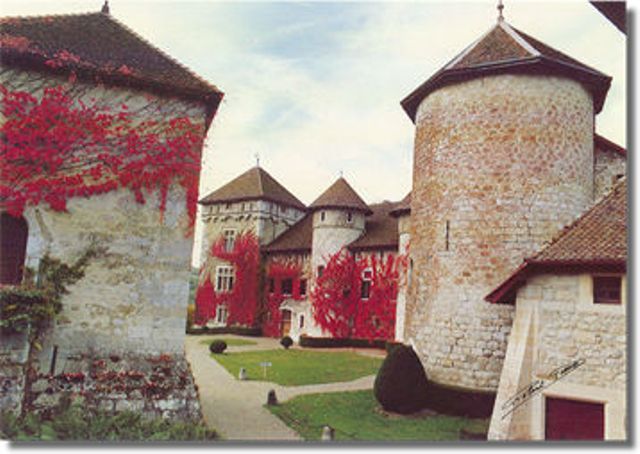 Location: Thorens-Glières, in the Haute-Savoie departement of France (Rhone-Alpes Region).
Built: 1060.
Condition: In good condition.
Ownership / Access: Privately owned.
ISMH Reference Number: PA00118464
Notes: The Château de Thorens is located in the municipality of Thorens-Glières in Haute-Savoie, about twenty kilometers north-east of Annecy, just outside the village, by the amount drive Glières plateau. It is often confused with the castle of Sales, his former neighbor a few hundred meters: Sales was destroyed by order of the King of France, Louis XIII, in 1630. The castle of Thorens also improperly called "castle of Thorens-Glières" . In reality, "Thorens-Glières" is the name that now bears the village, since the Liberation; since April 19, 1947, exactly. The castle, meanwhile, was still and simply called "Thorens Castle." However, some old documents (including seventeenth century) call it "Castle Compey", the name of its first owners: the powerful lords of Compey. The Thorens Castle is located outside the village of Thorens-Glières at the beginning of the climb to the plateau of Glières. The tour includes the keep, the guard rooms of the twelfth and thirteenth centuries, the kitchen and its imposing chimneys (1632), lounges, bedrooms and offices, richly furnished and decorated with works collected from the Italian Renaissance to Napoleon III with including Flemish tapestries depicting Tobias of life, and paintings by great masters. Part of the garden (a former Italian garden of the seventeenth century) is listed as a historic monument.