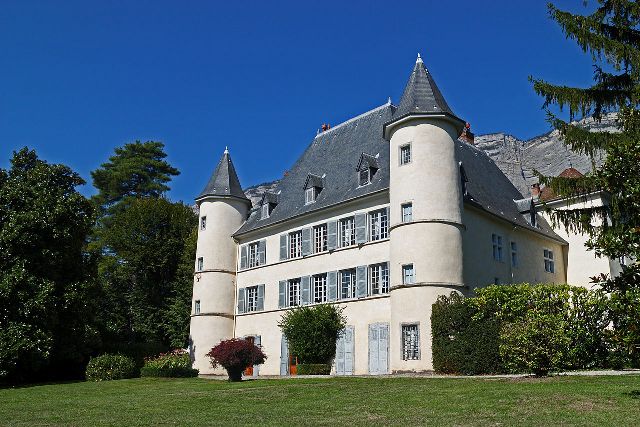 Location: Biviers, in the Drôme departement of France (Rhone-Alpes Region).
Built: 15th-19th century.
Condition: In good condition.
Ownership / Access: Privately owned.
ISMH Reference Number: PA00117123
Notes: Château de Serviantin or Servian castle is a pleasure palace of the fifteenth and sixteenth centuries that stands in the town of Biviers in the Isère department in Auvergne region Rhône-Alpes. It is part of the many castles or fortified houses that stand in the Grésivaudan valley, also called "Valley of hundred castles". He succeeded a former stronghold of the thirteenth century.The castle is the subject of a partial registration as a historic monument by decree of 4 November 1960. Only the facades and roofs are enrolled. Castle Serviantin is located in the French department of Isère in the town of Biviers.The origins of the castle date back to the thirteenth century and like many castles built at the time of the Middle Ages, its primary function was primarily defensive. Then over the following centuries, from the Renaissance to the nineteenth century, the building underwent many modifications to embellish and make it more comfortable thus turning into a beautiful residence approval. In the fifteenth century the castle is the possession of the family of Arces Morard, whose arms are always engraved on the pediment of the front door from that time. From 1500 and until 1655, it was nearly four generations of family Servien Biviers lords who lived and succeeded in this house. It was the residence that particular born Abel Servien, statesman and French diplomat who exerted between the other function Superintendent of Finance of Cardinal Mazarin in 1653.The present castle in the form of two main buildings built in square dating from the fifteenth and sixteenth centuries. Despite these many arrangements the Servian castle still keeps the medieval allure thanks to its three towers. Two of them are round and flank the southeast facade facing Belledonne. The third is a large square tower on the north side of the building vis-à-vis the Chartreuse mountains.