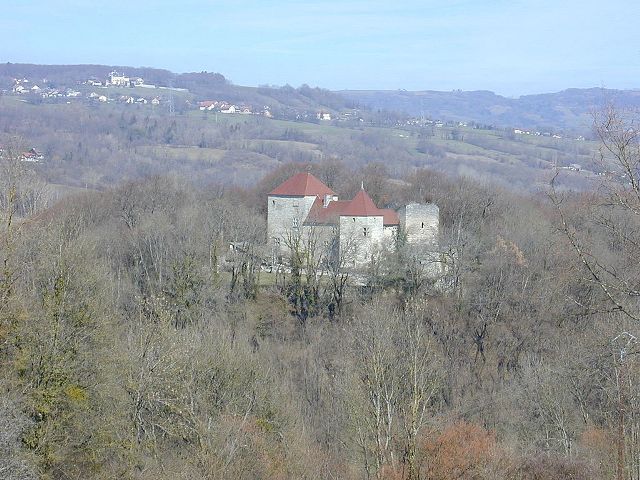 Location: Marlioz, in the Haute-Savoie departement of France (Rhone-Alpes Region).
Built: 15th-16th century.
Condition: In good condition.
Ownership / Access: Privately owned.
ISMH Reference Number: PA00118439
Notes: Château de Sallenôves is a former stronghold of the twelfth century, heavily reworked in the fourteenth - fifteenth centuries, Middle center Age of the lordship of Sallenôves, which stands in the hamlet of Bonlieu in the town of Marlioz a French commune, in the Haute-Savoie region Auvergne-Rhône-Alpes. The castle is the subject of a registration as a historic monument since April 17, 1931. A vast enclosure occupies a promontory that ends with steep slopes on all sides except the east, where it is defended by a Double belt dry ditches dug in stone, met today. Access to the farmyard is via this side after crossing the mistress and bastion door. The door is topped by a coat of arms representing the arms of family Sallenôves, and defended by a gunboat. It contains two large main building flanked by two large square towers, the "Tower room" and the "square of the Tour." The tower mistress called 'Tour de César "ruined the Revolution, its stones were used in the nineteenth century to build the church of Marlioz, 9 × 12 meters thick walls of 1.30 m is the oldest part . Only the south and west sides have been preserved. Louis Blondel date of its siding regular litages the early thirteenth century. Access to the courtyard through a door protected by battlements on consoles, which it subsists only recent, breakthrough between the "Tour de César" and the "square of the Tour." The latter lights among others a corner muntin. On the court, gives the kitchen. The well is located in an adjoining cellar. In order to imitation castles "princely" on the floor, a vaulted arched chapel dedicated to St. Catherine, located at the end of a Gothic gallery, is in direct communication with the private apartments. The castle experienced its first expansion in the fourteenth - fifteenth centuries, it built the "Tower Room". It is overhauled in a Renaissance style in 1534 before suffering a beautiful restoration in the twentieth century. The dovecote was built at the foot of the hill that bears the strong house.