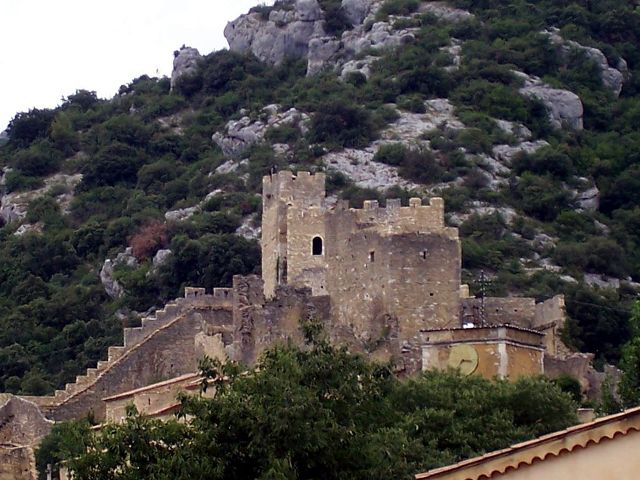 Location: Saint-Montan, in the Ardèche departement of France (Rhone-Alpes Region).
Built: 11th-15th century.
Condition: Ruined.
Ownership / Access: --
Notes: The Château de Saint-Montan is a castle in the commune of the same name, in the Ardèche department. Built in the eleventh century for military purposes, it reaches over time a residential purpose. Very touched by the wars of religion, it remains abandoned until the late 1960s, where for forty years, nearly 10 000 volunteers will succeed to revive the castle and its town. The oldest parts of the castle date from the tenth century, the fortress was then extended in its lower part until the fourteenth century. During the sixteenth century, during the wars of religion, the castle and the medieval town suffer greatly. The village fell to the Protestants in 1563, and then in the spring of 1570, the Coligny army captures the castle. In 1609, the castle-fortress seemed uninhabitable and required 8,700 pounds of repairs. In 1649, for 117 pounds, a gap of nine meters long was clogged, but probably no other remedy was taken. During the Revolution, the fortress is sold. First used as a farm, it will end in a stone quarry. The village, then uninhabited, falling apart in the early twentieth century. It was only from 1969, over a period of forty years, that the entire medieval village was restored by volunteers, including scouts, school children and students.