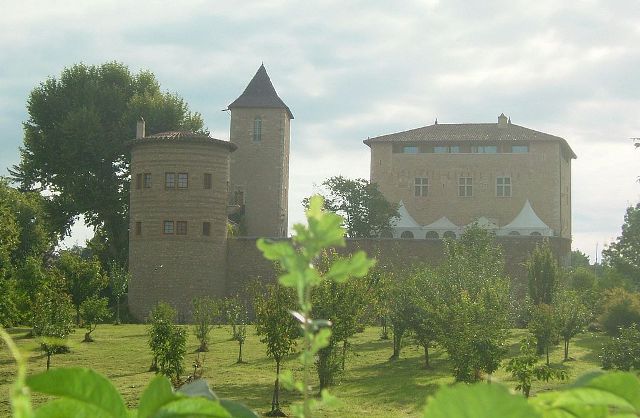 Location: Saint-Bernard, in the Ain departement of France (Rhone-Alpes Region).
Built: 13th-14th century.
Condition: In good condition.
Ownership / Access: Private property.
ISMH Reference Number: PA00116614
Notes: Château de Saint-Bernard (olim St. Barnard), is a former stronghold of the late thirteenth century or early fourteenth century, rebuilt in the seventeenth century and restored in the nineteenth century, the center of the Lordship of St. Barnard , which stands in the municipality of Saint-Bernard in the department of Ain region Auvergne-Rhône-Alpes. The castle, including the yard and the grip of the old ditches are the subject of a classification as historical monuments by order of 10 April 1997. In 1873, St. Bernard was walled and ditched. Two doors only allowed access. The arc of one of these doors are still; the other is ruined. The twenty-first century the castle of Saint-Bernard is in the form of a rectangular enclosure flanked on one of the short sides of two round corner towers, and limited by a high opposite the house, once crowned a walkway cantilevered asked. Access to the courtyard is through a square tower door that opens in the middle of one of the long sides.