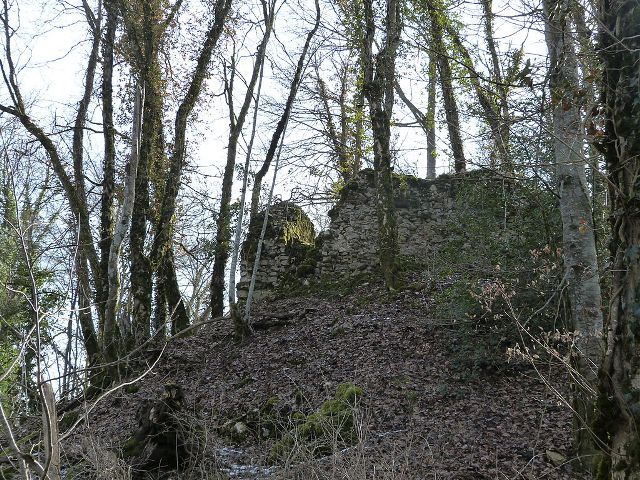 Location: Aranc, in the Ain departement of France (Rhone-Alpes Region).
Built: 12th century.
Condition: In good condition.
Ownership / Access: Privately owned.
Notes: Château de Rougemont is a former stronghold of the twelfth century, the capital of the lordship and the marquis de Rougemont, the ruins stand in the town of Aranc in the department of Ain, Rhône-Auvergne region Alps.The manor with castle and marquis, is the possession of William de Rougemont, knight, living in 1150, which is the oldest known lord. The castle is ruined for a long time and we do not know the date of construction but it was probably built in the twelfth century. It belonged, initially, to the family of Rougemont under the suzerainty of the lords of Coligny, and the lords of Thoire-Villars. Towards 1189, the land of Rougemont, were attached to the lords of Thoire-Villars following the wedding of Umberto II of Thoire with Alix de Coligny.In the early fourteenth century, the fortified house held by Jean de Luyrieu, vassal lords Thoire-Villars. Threatened by Count Amadeus V of Savoy, after taking by the latter intervened castle of Saint-Germain August 23, 1321, its owner sells it, in 1321, to Count. January 20, 1366 by letter, Humbert, Lord of Villars and Thoire authorizes Ame, Lord of Rougemont, as a reward to plant gallows in the land of Rougemont and to exercise all middle and low justice to the load the tribute. July 18, 1422, John Lord of Rougemont by will leave the lordship to his eldest son William. The direct descendants of William inherit this land to Huguette, daughter of Pierre de Rougemont, first husband, April 3, 1496, to William of the Forest, lord of Cuchet, including Pierre stepfather him had donation during life than half of the lordship of Rougemont. September 28, 1508, Huguette married his second wife, his cousin, Gaspard de Rougemont, Lord Lentenay (Lantenay).Following a lengthy trial, headed by the Duke of Savoy, between the children of two beds of Huguette de Rougemont, May 20, 1510, half of the lordship is awarded by sentence, the lord of Cuchet the responsibility of being bought out by a certain amount; Duke committing to accommodate both parties: François Mareschal, lord of Meximieux, Francis of Andelot, Lord of Pressiat, butler Duke, Jean-Francois Scaravel, collateral Grand Council of the Duke and Francis Burgar, doctor of-rights. April 13, 1513, the land was bought to Jean de la Forest, Prior and Lord of Nantua, uncle and guardian of William's children of the Forest, Lord Cuchet. The trial will be reopened after the death of Gaspard de Rougemont by Philibert of the Forest, baron Built-d'Albanais (Montcel), son of the first bed and Antoine de Rougemont, lord of Pierreclos, son of the second bed By judgment of the senate confirmed the land was entirely to Antoine de Rougemont. Balthazard de Rougemont, lord of Rougemont and Chandee (Vandeins) sells to Jean-François GRENAUD, Esquire, sergeant major of the city of Bourg, whose son-small Joseph GRENAUD, obtained by the erection marquis by letters patent of June 1696. by the mid-seventeenth century, the marquis of Rougemont password family GRENAUD than Montillet, who enjoyed in 1789. Over time the castle is deteriorating and in 1776, a complaint of Louis Honoré Montillet of GRENAUD teaches that the castle was already in ruins. Indeed workers in the region had shot the cover above the castle kitchen and removed the wood, furniture, dimension stone and door fittings and window to take them to Corlier to renovate the stronghold called "castle" . The area of ​​the castle was owned by the state from the Revolution. Recently, a descendant of the family of Rougemont bought the land in order to save what remains.