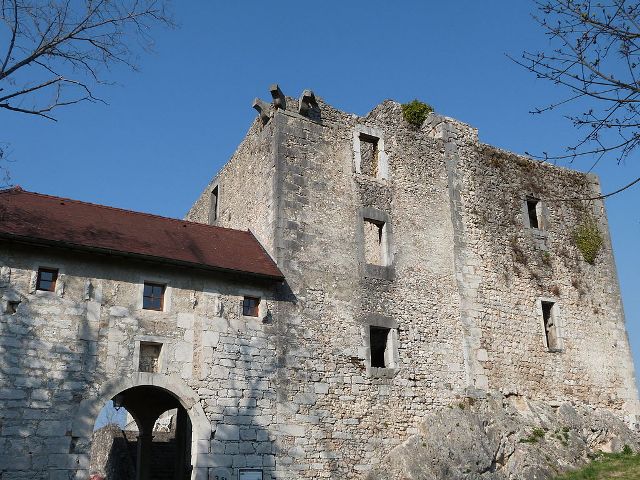 Location: Cressin-Rochefort, in the Ain departement of France (Rhone-Alpes Region).
Built: 13th century.
Condition: Ruined.
Ownership / Access: --
Notes: Château de Rochefort-sur-Séran is an ancient castle, the thirteenth century, the center of the lordship of Rochefort, the remains of which stand in the town of Rochefort-Cressin in the Ain department in the region Auvergne-Rhône-Alpes.Its date of construction is estimated in the eleventh or twelfth century. Gui de Rochefort was one of the first known occupants of the castle. In 1159, the latter donated Belley Episcopal headquarters with all its lands. The castle is mentioned in 1361. In 1375, Count Green, Amadeus VI of Savoy, alienates land for Stone Gerbais, treasurer general of Savoy, with the lordships of Chateauneuf and Virieu the Great. Following the trial of the latter, all his property was confiscated in 1377 by the Count of Savoy. By letters patent of August 13, 1435, the Duke Amadeus VII yawns as a reward, the castle, the town and the command of Rochefort in any high court, medium and low, to Antoine de Gerbais, knight, son of Pierre Gerbais. The latter will only have daughters, Margaret, Gasparde, Francoise and Jacquemmette of Gerbais; the subservience that have been doing that for Gerbais Antoine and his male descendants, the land reverts to Duke Louis of Savoy, who by letters patent of Geneva from September 18, 1446 to Marguerite réinféode lordship and Gasparde of Gerbais women of Claude and Louis de Menthon, brothers. Claude Menthon, left alone lord of Rochefort, succeeded him Janus de Menthon, Menthon Jean, François de Menthon, Menthon Prosper (1602) and Balthazar Menthon (1642) who possessed the land of Rochefort in barony title. The Lordship was then owned by the following families: Family Mareste: Jean-François Mareste (1667), Albert Eugene de Mareste (1702), Jean-Jacques de Mareste (1723); Montillet family GRENAUD Pierre-Anthelme of Montillet (1740), Louis-Honoré Montillet, Marquis de Rougemont (until 1792; it is the last lord of the castle owner). Between 1991 and 2003 restoration works were carried out (with the help of the Youth site Concordia).