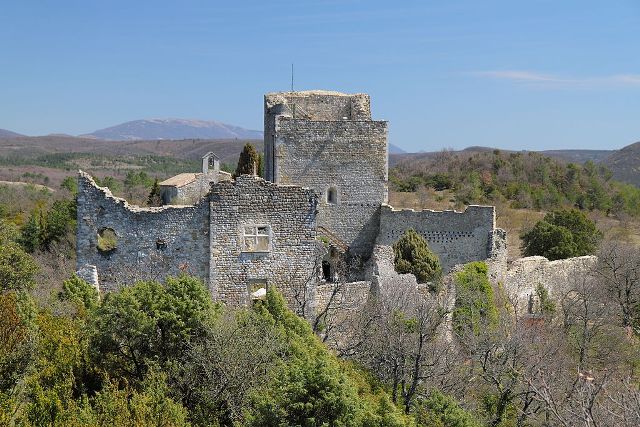 Location: Rochefort-en-Valdaine, in the Drôme departement of France (Rhone-Alpes Region).
Built: 12th century.
Condition: Ruined.
Ownership / Access: Owned by the municipality.
ISMH Reference Number: PA26000010
Notes: Château de Rochefort-en-Valdaine is an ancient earth castle from the end of the tenth century or early eleventh century has given way to a stone castle in the twelfth century and whose ruins stand in the town of Rochefort- en-Valdaine in the department of Drome and Rhone-Alpes Auvergne region. It was the capital of the commandment of Rochefort attested in 1138. The castle in full (pregnant, dungeon, house, Saint-Blaise chapel) is the subject of a registration as a historic monument by decree of 6 September 2001.The originally mound of earth first castle was partly cut in the rock. Castle of Rochefort-en-Valdaine is surrounded by a wall recovery in the fourteenth century. It is reoccupied and modernized in the sixteenth century after a century of neglect. It is consolidated in the twentieth century by a local association (ACROCH). The castle hosts summer exhibitions and a research center on the feudal mounds.