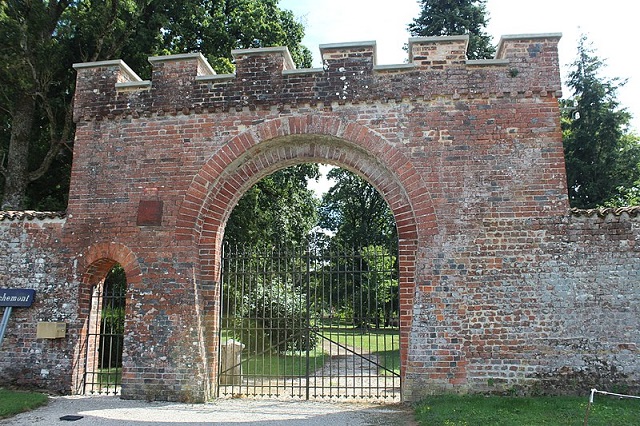 Location: Villette-sur-Ain, in the Ain departement of France (Rhone-Alpes Region).
Built: 13th century.
Condition: --.
Ownership / Access: Private person.
Notes: The castle of Richemont is an old castle of the end of the xiiie century, center of the seigniory of Richemont, which stands on the town of Villette-sur-Ain in the department of the Ain and the region Auvergne-Rhône-Alpes .The castle is the subject of an inscription under the historic monument by decree of 9 March 1927.The lordship in all justice was originally the possession of the lords of La Palud. Girard de la Palud, knight, built the castle towards the end of the thirteenth century. This Girard was the father of Peter de la Palud, Patriarch of Jerusalem. Sibille, daughter of Jean de la Palud and granddaughter of Girard, carries Richemont in dowry, first to Jean, lord of Chandieu, in Dauphine, and then, towards 1370, to Henri de Varax, his second husband. In 1477 Richemont returned from the family of Varax to that of La Palud by the marriage of Gilberte, Countess of Varax, with Hugues de la Palud, lord of Chatillon and Saint-Maurice. Jean-Philibert de la Palud, his son, who died childless in 1527, transmits it to John de la Palud, his cousin, Lord of Jarnosse. The latter left only the daughters, who inherited Claudine de Rie, their mother, who had Varambon erected a marquisate in 1576, annexed to it the seigniory of Richemont, which she gave a few years later with all the other lands From the house of La Palud, to Marc de Rie, his nephew. In 1595, the castle was badly damaged by the troops of Biron, who had ruined and depopulated the village. In 1603, "there remained but a dozen wretched inhabitants." In 1604 Richemont was partly engaged for a few years in Edme Malain, Baron de Lux. He remained in the family of Rie as far as Ferdinand, son of Francis de Rie and grandson of Marc, who sold him as a baroness on June 3, 1655, to Pierre Perrachon of Lyons, whose descendants alienated him, On March 20, 1756, to Jean-Francois Balland of Augustebourg, squire. He was in the latter family in 1789. It was in the castle that Louis-Gabriel Michaud was born on January 19, 1773, who died a member of the Institute in 1858. His brother Joseph, the author of the Spring of a Proscribed and the History of the Crusades, Was raised.