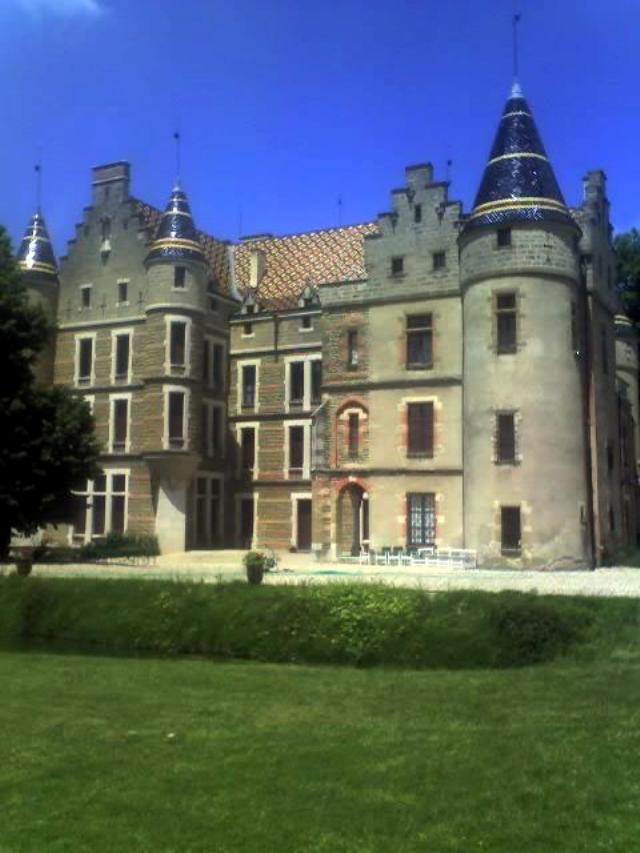 Location: Châbons, in the Isère departement of France (Rhone-Alpes Region).
Built: 1860.
Condition: In good condition.
Ownership / Access: Privately owned.
ISMH Reference Number: PA00117132
Notes: Château de Pupetières is a castle of the nineteenth century that stands in the municipality of Chabons in the Isère department in Auvergne-Rhône-Alpes region. The family of Virieu is in possession of the site since the thirteenth century, when the construction of the original castle. Castle Pupetières the subject of a classification as a historic monument by decree of November 8, 1972.It is in 1222 that was built by a branch of the family of Virieu first castle was the center of the Lordship of Chabon. Originally it was only a fortified house where Virieu lived until the Revolution. At that time the family property was confiscated and had to emigrate Virieu near Geneva, Switzerland, or another branch of the family was located. On his return in 1805, the Countess of Virieu not found until three ruined towers of its stronghold which had been looted and burned during the Revolution. She decided to buy back land of the Grand Lemps, Montrevel and Pupetières and it was his little son, Alphonse, who confided years later, in 1860, the reconstruction of the castle to Eugène Viollet-le-Duc.The castle is a fine example of Gothic Revival architecture of the nineteenth century in the Isère department. Covering an area of ​​7500 m2, various building materials were used for its reconstruction took place in 1861. So the stone walls, alongside those bricks, mud and pebbles in pesci. A front building projecting hexagonal in shape, decorated with a balustrade, marks the entrance. The seven towers topped by pepperpot, and the main buildings are covered with glazed tiles scales that highlight the multiple setbacks roof of the castle. Inside the building the sets also mix different materials. The painted wooden throne of the living room or a monumental fireplace mantle whose sculpture depicts a scene recalling that the family Virieu offered land for the Carthusians can build their abbey of Sylve Bénite (Le Pin). That same room has several tapestries from the Royal Manufactory of Beauvais. The library is also adorned with painted wood and is home to many valuable books and archives that the family had hidden before taking refuge in Switzerland. These writings were able to regain cabinets books on two floors of the property. Brick and marble are also present inside the castle, like many false draped features restorations of Viollet-le-Duc.

How To Get To Château de Pupetières (Map):