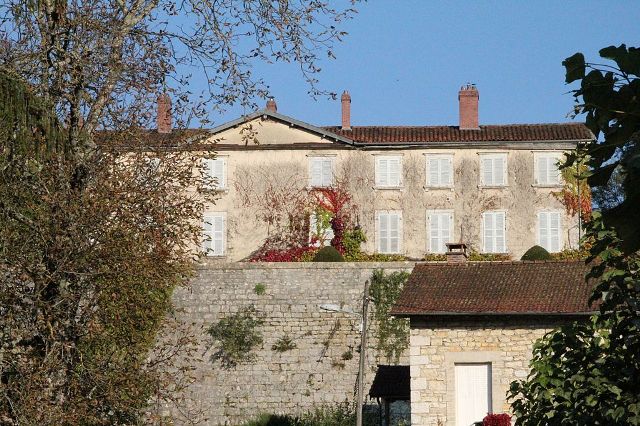 Location: Poncin, in the Ain departement of France (Rhone-Alpes Region).
Built: 13th-18th century.
Condition: In good condition.
Ownership / Access: Privately owned.
ISMH Reference Number: PA00116531
Notes: Château de Poncin is an ancient castle, founded in the late twelfth century by Humbert II Thoire-Villars, rebuilt in 1290 and remodeled in the sixteenth and seventeenth centuries, center of the Lordship of Poncin, which stands on the Common Poncin in the department of Ain, in region Auvergne-Rhône-Alpes. The castle is the subject of a partial registration under the Historic Monuments by order of 12 March 1970. Only the facades and roofs, the remains of ancient fortifications, terraces, retaining walls and gardens are enrolled.It's Humbert II Thoire who built the Castle of Poncin in 1180. The castle was one of the favorite residences of the lords of Thoire-Villars, who held their chamber of accounts. In 1290, it was rebuilt by Humbert IV Thoire. In the early fourteenth century, 19 October 1308, Humbert V, Lord of Thoire and Villars, will completely overhaul and will sell, against 7500 Viennese books, suzerainty to the Sire de la Tour du Pin, John II of Viennois, dolphin Viennese who gives him liege fief. The rights passed in response to the counts of Savoy who had them recognized by acts of 16 October 1375 and 7 February 1385. October 29, 1402, Humbert VII, the last of the lords of Thoire-Villars, "full of years and of trouble," sells to Count Amadeus VIII of Savoy, with all that was left of his land of Bresse and Bugey inherited from his ancestors, his lordship Poncin, he nevertheless reserves the enjoyment until his death, which will occur on May 7 1423. the castle will go to the house of Savoy for more than a century and a half. Poncin abandoned by the dukes of Savoy, who were rarely there was, among others, included in the dowry of Anne of Cyprus, widow of Louis, Duke of Savoy, and after it in that of Claudine de Bretagne, Viscountess Bridiers ( the Underground), Philip Duke of Savoy widow, Dowager Annecy, Châteauneuf en Valromey (Songieu), Poncin and Cerdon, who made his residence for some time.The castle then became the property of Joseph Savarin Marestan who was appointed in 1859 to advise the Prefecture of Allier. He belonged to an ancient family of Bugey, ennobled by charging at the end of the seventeenth century and that gave a whole line of guards of the king's body and a musketeer who was raised in 1815 as Baron of Marestan.