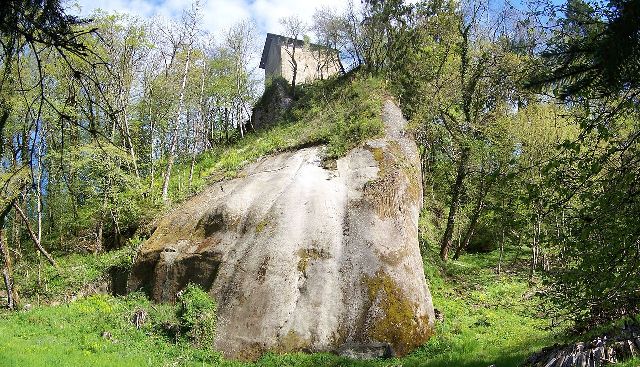 Location: Alby-sur-Chéran, in the Haute-Savoie departement of France (Rhone-Alpes Region).
Built: 13th century.
Condition: Ruined.
Ownership / Access: --.
Notes: Château de Pierrecharve is a former stronghold of the thirteenth century, the remains of which stand in the town of Mûres a French commune in the Haute-Savoie department in Auvergne-Rhône-Alpes region. It is one of seven castles with Chateauvieux, Le Donjon, Montconon, Montdesir, Montvuagnard and Montpon, which ensured the defense of Alby. These castles were a defensive system to control the passage of the torrent.The castle is, in 1297, possession of William Paradin. The latter gives the Jean Geneva, bishop of Geneva in 1353. It then goes to the family of La Rochette that will keep until 1558. If another: Jean de La Rochette, husband of Isabella of Revorée and Jeanne de La Rochette 1450, daughter of Jean Claude and wife I of Langins then came to Jacques de La Rochette 1477 vidomne Alby, husband of Marguerite de La Rochette, another daughter of Jean de La Rochette and Jacqueline de La Rochette, daughter of Jacques, married to François Montfalcon, and finally their son Jacques de La Rochette, died childless in 1550. The property then passed to his brother Sébastien de La Rochette, Bishop of Lausanne. The castle then passed in 1558 at the hands of Montvuagnard family in the person of Alexander Montvuagnard, son of Anthelme of Montvuagnard, Lord of Boëge and Jeanne Montfalcon, sister of the bishop. His son, Sebastian Montvuagnard, inherits and transmits in 1621 to his son Prosper Montvuagnard selling the castle and Alby vidomnat the commandments of Rumilly and Marcellaz. Then take possession of the castle of Beaufort family. Comes Jean Beaufort, Lord of Hery and Marthod Beaufort and her daughter Jeanne de Candie, wife of François de Peysieu, Lord of Salagine and Villette. Died without descendants, the castle is the property of her husband who sells it in 1653 to Francois Melchior de Montvuagnard. His second Prosperous daughter Montvuagnard, Bernadine sister in Annecy, bequeathed the castle to Colonel Victor Mareschal Duyn, Marquis de Saint-Michel, husband of Catherine Charmoisy, granddaughter of Louise Duchatel the "Philotée" of St. Francis de Sales.On the death of Catherine Charmoisy, his son Henry of Mareschal Duyn who inherited the castle in 1702 sold it in 1726 to Charles de Granery, Marquis de la Roche. The latter sold it in 1788 for the sum of 3316 pounds Reverend Philibert Simond, vicar of Rumilly, Member of the Lower Rhine to the National Convention, guillotined in Paris on 14 April 1794. Her sisters, Jane and Michelle Simond, the Rumilly bequeath to the hospital that sells it at auction. The new owner used as a stone quarry. The square tower is folded over eight meters. His heirs, Fressinet families and Terry yield in 2007 by long lease for a term of 40 years, the association of the Companions of the castle Pierrecharve. Inhabited until the 1960s, it has remained abandoned for many years. The association "Les Compagnons du Pierrecharve Castle" has undertaken since 2006 to rehabilitate the site. She has plans to create a Acheo-site to recreate the habitat of a small lord of the thirteenth century, with the restoration of the tower and the construction of an educational hamlet at the foot of the "Pierre Chauve" . This will include a farm and the various activities related to the Lord's service. The association is looking for partners to participate in the implementation and financing of the project.Buildings, there remains only a rectangular tower, partly in ruins, still 17 meters high above the river Chéran. Access to the tower by an arched doorway and the floors are lit by mullioned windows of the sixteenth century.