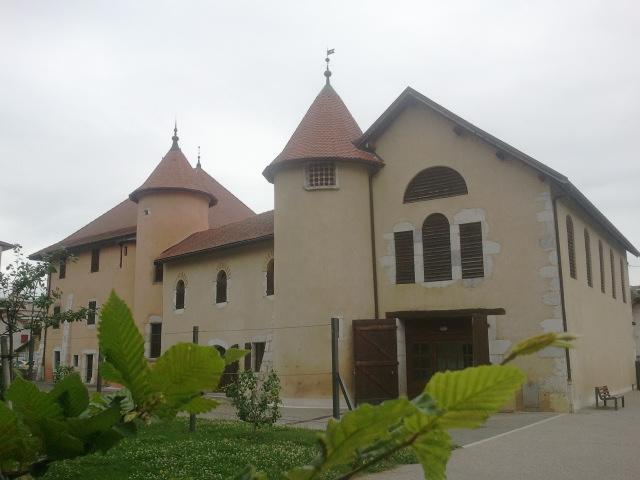 Location: Annecy, in the Haute-Savoie departement of France (Rhone-Alpes Region).
Built: 12th century.
Condition: In good condition.
Ownership / Access: --.
Notes: Château de Novel or mansion is a former stronghold of the twelfth century stands in the town of Annecy in the Haute-Savoie region Auvergne-Rhône-Alpes. The facades and roof are the subject of a partial registration under the Historic Monuments by order of 31 October 1975. Only the facades and roofs are included.The site occupies the mansion today was probably occupied by a Gallo-Roman villa. The origin of its name comes from "recently cleared land", hence "Novel". In the twelfth century, it is the possession of the counts of Geneva who reside there during their passages in the Annecy area before they can install, in 1219, the castle of Annecy. In 1174, Count Amadeus I of Geneva and the Abbot of St. Saint Maurice will sign an agreement in the arbitration of the bishop of Belley, Saint Anthelme Chignin. July 25, 1195, William I of Geneva dies there. In the fourteenth century, the family that has the allegiance, takes the name of it. The fifteenth century, it is in the hands of family Renguis, then goes to that Chenex. By marriage, he cut in 1512, the family of Sales. The father of St. Francis de Sales, the title of Lord of Novel. In 1556, "Novel" is the property of Amadeus Viollon. In the early seventeenth century, the five girls, 12 children, Michel Viollon Novel, Annecy trustee, entered the Visitation bringing in dowry the mansion. The Visitation, who keep up to the French Revolution, make it the heart of a farm. Confiscated and sold as national property, he will keep this last function until the 1960s In 1972, it was bought by the Gay family the town of Annecy, which restores.The Novel Manor is today in the form of a quadrangular building from a whole of the fifteenth century with a round tower in its southwest corner. Previously he was surrounded by a wall and a ditch, which was crossed by a drawbridge. In 1612, it is described in an inventory as "the bridge front door and out The said upheld by the middle of troys pointaillies of chesne placed in the middle of everything is Fossel Gasté deed." In the nineteenth century dovecote tower was connected with that of the strong house with a main building, giving it its current appearance. The farm that flanked the loft, has been replaced by a discount. In the courtyard, it was erected in the year XI of the Republic (1803) a large agricultural building. In a text describing the loft as being in bad shape "item to reset the fault dovecote and the rambocher repastrer and resurfacing."