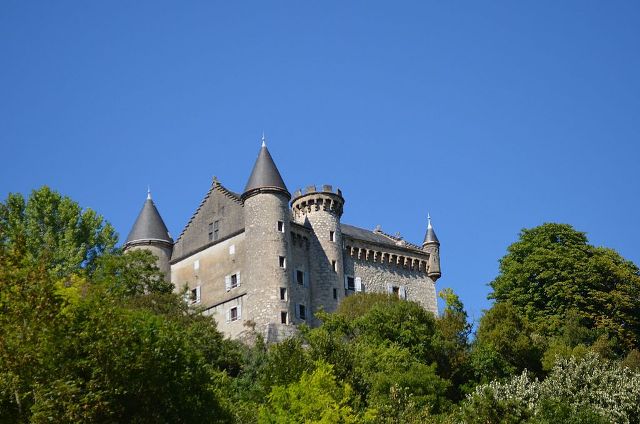 Location: Culoz, in the Ain departement of France (Rhone-Alpes Region).
Built: 15th century.
Condition: In good condition.
Ownership / Access: Privately owned.
ISMH Reference Number: PA00116390
Notes: Château de Montvéran is a former stronghold of the fifteenth century, restored in the nineteenth century, the center of the Lordship of Montvéran, which stands on the town of Culoz in the Ain department in the region Auvergne-Rhône-Alpes. The castle would have been built by Pierre de Luyrieux in 1316. The castle is the subject of a registration as historical monuments by order of 20 September 1946. The first certain mention of the strong house dates from 1433 and everything suggests that it is a creation of the fifteenth century. It was restored in the nineteenth century. The castle still exists largely comes as a high rectangular dwelling crowned with battlements and whose base is talutée. It is flanked on the corners, the side of the attack, two round towers and pepper shakers on the opposite side. A round tower with a staircase adjoins on the south facade. One can also see at the entrance to the driveway leading to the castle an old tank and a stone aqueduct used for water supply manorial mills.

How To Get To Château de Montvéran (Map):