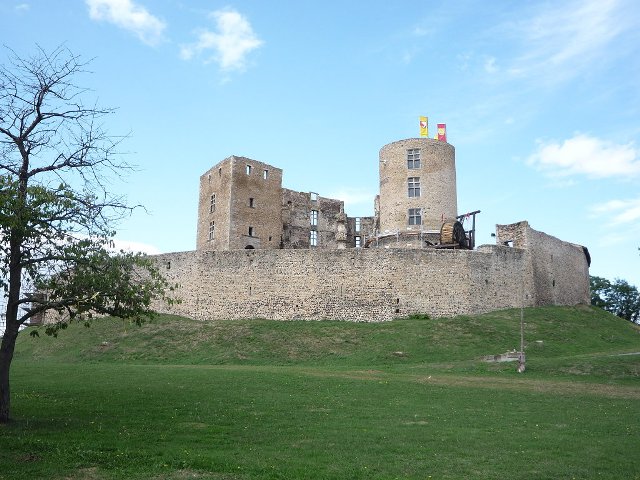 Location: Montrond-les-Bains, in the Loire departement of France (Rhone-Alpes Region).
Built: 12th-16th century.
Condition: In good condition.
Ownership / Access: Owned by the municipality.
ISMH Reference Number: PA00117532
Notes: Château de Montrond is located in the town of Montrond-les-Bains, in the department of the Loire. The remains of the castle were listed as historical monuments March 13, 1934 and the entire site (the castle and its surroundings) was registered February 22, 1946. As also for other feudal castles of the Loire which it remained in ruins, like that of Rochetaillée (Loire) or the Essalois in Chambles, the castle of Montrond-les-Bains was put together in part. In recent years, there are organized in August a medieval festival.The castle is named after the Mont Rond, a volcanic dyke overlooking the plain. From the twelfth century, the quote "castrum climbed rondunti" indicates the presence of a small fortification, property of the counts of Drill. In 1302, Count John I exchange the command of Montrond and its tower with Arthaud Saint-Germain. Arthaud IV began around 1325 the building of a former castle. In 1523, the marriage of Marguerite Arthaud IX Albon, daughter of Jean, Governor children of Francis allows the Montrond lordship to reach the peak of his fame. The austere fortress was transformed into a beautiful and rich remains of Renaissance taste. Very involved in the wars of religion, the Arthaud IX descendants retain their castle intact thanks to their loyalty to the royal power.The family leaves Montrond in 1730 to settle near Paris. The last marquis, Antoine-Claude, is guillotined in April 1793. In September of the same year, the castle of Montrond was burned by a detachment of revolutionary soldiers. The house of Apchon-Montrond is extinguished in 1807 with the single girl dead without descendants. The castle was sold in 1828 to an individual who made a stone quarry. Left for a century and a half abandoned, he is saved from final ruin by the Friends of the Castle founded in 1969. Since 1984 it is the property of the municipality.