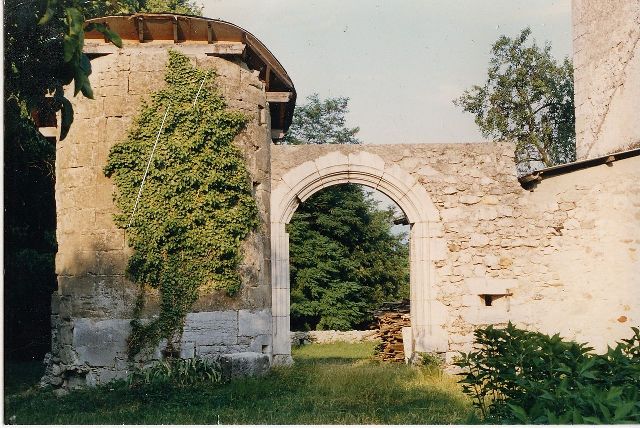 Location: Cognin, in the Savoie departement of France (Rhone-Alpes Region).
Built: 13th century.
Condition: Ruins.
Ownership / Access: --
Notes: Château de Montcharvin is a former stronghold of the thirteenth century, rebuilt in the fourteenth and fifteenth centuries, center of the Lordship of Montcharvin, which stands in the municipality of Cognin in the Savoie department in the region Auvergne-Rhône-Alpes. In the Middle Ages, very important point for the defense of the country, it is one of three castles with that of Salins and Villeneuve who stand in the town of Cognin. The castle originally belonged to the family of La Salle, Humbert de La Salle lies in the fourteenth century and the next century it is the possession of the family Bonnivard; Humbert de La Salle had sold them the house of Chambéry in 1321. The castle passed in the early sixteenth century, following his marriage to Claudine Bonivard at Janus Duyn baron Val d'Isere (Val d'Isere), Viscount of Tarentaise, Savoie Grand squire. Their daughter, Louise de Duyn married a Piedmontese, the Valperga count, she had no children, tested in 1525 for a cousin, Pierre de La Forest, lord of La Barre, who was ambassador of Savoy in France, and one of the four barons who carried the stove at the funeral of Philippe de Savoie. His widow, Huguette of Somont, the live when tested, March 10, 1556. Jean de La Forest, their grand-son, great captain and also ambassador to France, obtained in 1592, letters allowing it to compel its taillables men, depending on the lordship of Montcharvin to overcome "both body Goods ". According to him, the Forest kept the castle until the eighteenth century. The castle is flanked by a large square tower, tower-residence, leveled at the roof. A spiral staircase is housed therein. The main facade of the house to the east overlooking a courtyard terrace, the enclosure wall was flanked by two round towers. One is ruined today, the second in the west, near the door, still in good condition. On the ground floor a large mullioned window illuminates a dining molded beams, in which there is a mantle large dating from the fourteenth century. The first floor also illuminated by a mullioned window. There are still two old doors, that of the entry, lowered arc dating from the fifteenth and sixteenth centuries, flanked by a round tower and a second, north, dated the thirteenth century, arched tierspoint paired with major keystones.