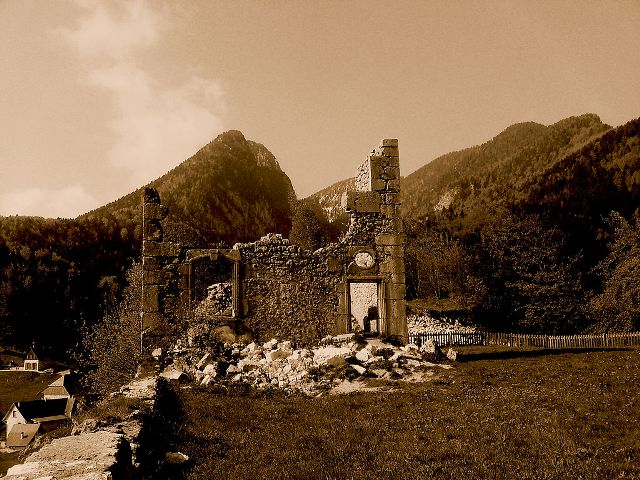 Location: Saint-Pierre-d'Entremont, in the Savoie departement of France (Rhone-Alpes Region).
Built: 10th century.
Condition: Ruins.
Ownership / Access: --
Notes: Château de Montbel (or castle of Split Rock or Castle of Epernay) is a former castle of the tenth century ancestral castle of the Lords of Montbel and d'Entremont center of the lordship of Entremont, whose ruins stand in the municipality of Saint-Pierre-d'Entremont in the Savoie region in Auvergne-Rhône-Alpes. In the tenth century, the top of the nipple is probably occupied by a castle mound. In 1098, we noted Philippe Entremont, husband of Lucretia Lascaris, Lord of Montbel and d'Entremont, he participated in the First Crusade and died at Antioch seat. Hugh I, his son inherits father's land extending du Granier in Saint-Hugues. He is succeeded by Georges de Montbel, husband, in 12192, the daughter of the Count of Ventimiglia and Leonor de Savoie, and their son, William. This Entremont enfeoffs his land to the Count of Savoy and accompanies Saint Louis, in 12482, the Seventh Crusade. The king will give him a thorn from the Holy Crown of Christ, he bought the Venetian. Upon his return, Guillaume de Montbel, will raise the castle of Thorn, located above Lake Aiguebelette, in order to maintain its relic. Family Montbel Entremont reside in the castle until Montbel 1306. In 1234, William d'Entremont, pays tribute to his castle and lands Guigues VI of Viennois, making it a place Advanced face the House of Savoy. But in 1240, his son, in tribute to Amadeus IV of Savoy. In 1245, Guigues VII of Viennois and John I of Vienna, in 1278, in demanding rights; the Entremont family renewing his tribute to Philip I, Count of Savoy. In 1306, Rollet Montbel d'Entremont, in turn breaks the tribute that bound him to the House of Savoy and goes under the suzerainty of John II of Viennois. Amadeus V of Savoy, in 1307, then laid siege to the castle; the potatoes to the number 300, should make up after several days of resistance. Soon after, the lord d'Entremont, Aymar de Montbel, is authorized by the Dauphin, to build a new castle, the castle of the Government of New Castle or Castle or St Peter, on the left bank of the Guiers, in Isère.

How To Get To Château de Montbel (Map):