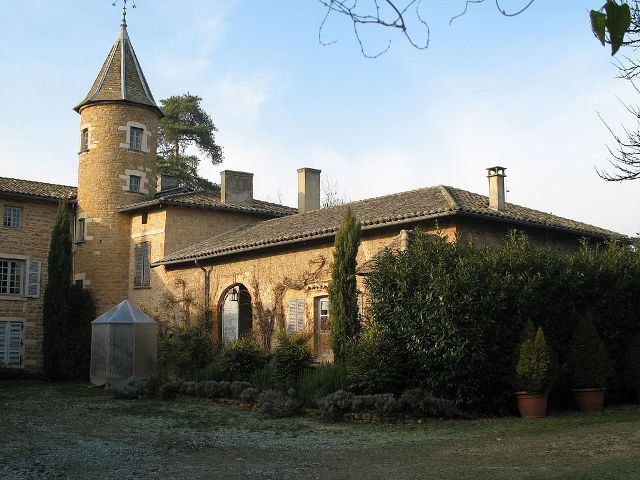 Location: Anse, in the Rhône departement of France (Rhone-Alpes Region).
Built: 16th-18th century.
Condition: In good condition.
Ownership / Access: Winery.
Notes: Château de Montauzan is located in the village of Lacenas, west of Villefranche-sur-Saône in the Rhône department.Montauzan Castle was owned by two successive families: first the Bessie family acquired the estate in the late sixteenth century and now takes the name of Bessie Montauzan. The first known representative of this family is Ponthus Bessie, Lord of Montauzan about 1636; he married Claudine Melin. Their son Laurent, who succeeded them, wife Anne Basset; he was adviser to the Bailiwick of Beaujolais, advocate in the parliament and recipient of the said consignment bailiwick. In 1745, the Germain family travels owner of the castle and is now called Germain Montauzan. Philippe (1746 -), who marries Étiennette Gourd, is a citizen of Lyon and his son Jean-Baptiste Philippe (1787-1862), is a wine merchant and mayor of Lacenas. He married his second wife Jeanne Marie Amélie Joséphine Poidebard, their eldest son Philippe Etienne Elysee Timothy (1823 - 1880), wife Louise Marie Claire Clarisse Gibert of Chazotte; he is a notary in Saint-Etienne. In 1966, the winery was sold to the Order of the Companions of Beaujolais. The Germain family still owns the castle, which became a vineyard of Beaujolais.The building dates from the late sixteenth century. From that time remains the corner tower, wearing a high conical roof. The body of main building is on two levels. In the courtyard, we find a well, ironwork dates from the seventeenth century. Of a château, the winery (or chest), while golden stone, dates from 1786.