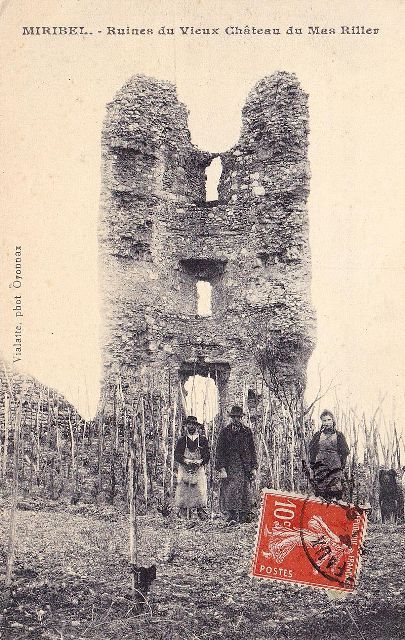 Location: Miribel, in the Ain departement of France (Rhone-Alpes Region).
Built: 11th century.
Condition: Ruins.
Ownership / Access: Private property.
Notes: Château de Miribel locally called sometimes Vieux Château Mas Rillier or the Chastel, is a former castle of the eleventh century, the center of the lordship and barony and finally the marquis de Miribel, the remains of which stand in the hamlet of Mas Rillier in the municipality of Miribel in the department of Ain, in region Auvergne-Rhône-Alpes.The existence of this small castle is attested since at least the eleventh century. One hypothesis is considering the presence of a Roman garrison in the vicinity of the location. However, no archaeological study has not corroborate it. Damaged over the centuries, the castle was almost completely destroyed in 1938 to make space for the construction of the Virgin of Mas Rillier. There remain only a few sections of walls of speakers and a heavily damaged round tower located on private land.