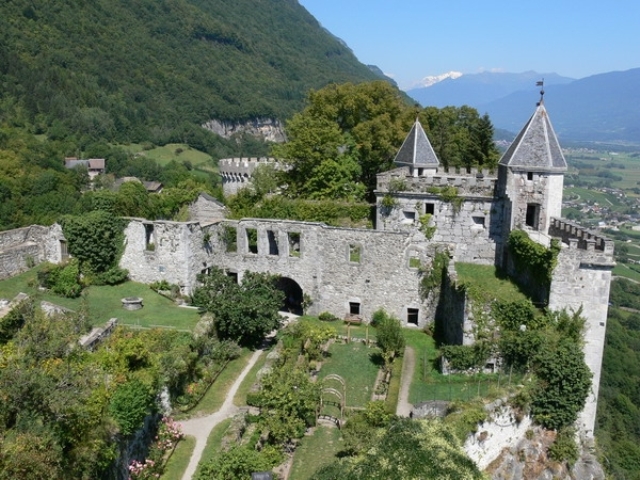 Location: Saint-Pierre-d'Albigny, in the Savoie departement of France (Rhone-Alpes Region).
Built: 11th century.
Condition: Ruined.
Ownership / Access: Privately owned.
ISMH Reference Number: PA00118304
Notes: The Château de Miolans is an ancient castle located in France in the municipality of Saint-Pierre-d'Albigny in the Savoie region in Auvergne-Rhône-Alpes. Built in the eleventh century in the Combe de Savoie at the gates of the valleys of the Maurienne and Tarentaise, it is the center of the lordship and barony of Miolans. The castle is the subject of a classification as historical monuments by decree of May 16, 1944. From 1987 to 1989, the site serves as a backdrop for some scenes of the TV series William Tell. Leon Menabrea fact in 1865 the following description: "This rock rises perpendicularly, to a prodigious height; two huge towers, a different architecture, dominate the mass of the building; a double row of ditches, a triple city walls once defended this mansion on the one side where he could be attacked; it took four hours of hard walking before reaching the dungeon. These buildings, most of which is still standing, obviously belong to different periods; Here we recognize the area of ​​the feudal lord, instead of war, the state prison. " The site is 200 meters long, 60 80 meters large4. The defense system of the castle consisted of four successive ditches (see 5), (or 3) drawbridges, 5 door, at least two harrows. The castle entrance is through the gatehouse, decorated with coats of arms of lords Miolans says "Gate of hell" real trap for the attackers who remained trapped under the fire of the defenders. After passing this obstacle, a ramp, exposed to fire defense of a covered gallery, pierced gunboats and dominated by the walkway, allowed to reach the lower courtyard, protected by a solid polygonal enclosure flanked by towers fourteenth and fifteenth siècles14 whose tower of the Backup. This enclosure now houses modern home and the chapel. A fountain decorates the courtyard. The keep or main tower, quadrangular thirteenth century top six floors, insulated from the lower court by a deep moat, rises in the most remote point in the connection of the lower court and the high court, that they dominate all its mass. It is reinforced by four turrets serving as buttresses. In the High Court, the dungeon, have only the name. This room of about 3 m deep opens after you've walked into a low corridor. This is probably a simple cold to keep blocks of ice for the warm seasons. The "blood stains" found on the ceiling are only due to the presence of ferrous minerals which have rusty due to moisture. A small window cliff side completes the package.

How To Get To Château de Miolans (Map):