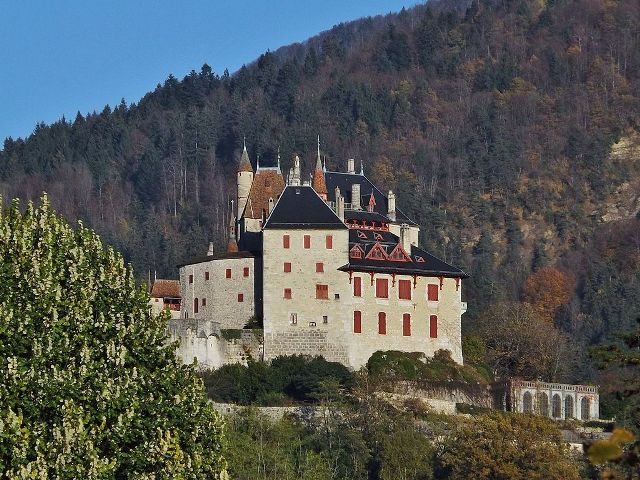 Location: Menthon-Saint-Bernard, in the Haute-Savoie departement of France (Rhone-Alpes Region).
Built: 10th-19th century.
Condition: In good condition.
Ownership / Access: Privately owned.
ISMH Reference Number: PA00118469
Notes: Château de Menthon-Saint-Bernard is an old fortress, the tenth century, rebuilt several times and restored in the nineteenth century in a neo-Gothic style, which stands in the town of Menthon-Saint-Bernard in the department of Haute -Savoie region Auvergne-Rhône-Alpes. It can be visited from May to September; the visit is enhanced in summer by a troupe of actors who brings the past the castle. Each year it hosts nearly 40,000 visitors. It is possible to rent rooms for receptions, seminars and weddings up to 150 people. Menthon Castle have inspired Walt Disney for his drawing of the castle of Sleeping Beauty. We've had confirmation in 2006 by the son-little of it. Neuschwanstein Castle is also often cited as inspiration. The castle is the subject of a registration as historical monuments by order of 21 February 1989.The first fortress was built in the tenth century, about the year 923; this was originally a simple wooden post guard installed on this promontory overlooking the ancient Roman road and the Lake Annecy. The current buildings were built in the thirteenth to the nineteenth century. In the eleventh century in the year 1008 was born in the early medieval fortress, Bernard de Menthon, who founded the hospice of the Grand and Petit-Saint-Bernard. Menthon The lords are known to us since the end of the twelfth century (around 1190), and still inhabit the castle, over 800 years later. The origin of the family of Menthon is uncertain but it would result in Burgundy, and from the thirteenth century, it will gain some feudal power. Upon installation, it built three large square towers. The castle is mentioned for the first time in 1249. In 1261, Thomas Menthon receives the inauguration of the annual fair, held on the first Sunday after All Saints, from the Bishop of Geneva.In the fifteenth century Nicod Menthon, was ambassador to France from Amadeus Duke of Savoy, then Governor of Nice and admiral of the fleet that will be sent by the Council of Basel in Constantinople. In the Renaissance the medieval fortress transformed into sumptuous residence, seat of the Barony of Menthon. Apartments take the place of parapets, and the family bought a large furniture. In the eighteenth century, a series of bright and spacious rooms are added on the façade overlooking the lake; the dining room and the large living room of 100 m2 to admire the lake of its four windows. The only notable fact that comes enameled history of the castle takes place May 7, 1793; an insurgent group led by Maurice Genand descendant of Thônes, arrived to pick up arms and ammunition, including two small cannons say "rustic" Note 2. The castle was acquired in 1809 by François de Menthon Ruphy Lornay. In the nineteenth century, between 1860 and 1890, the castle was remodeled; consolidation, elevation walls, turrets addition, creation of the gallery Tudor courtyard, by the Count René de Menthon who was a fervent disciple of Viollet-le-Duc. François de Menthon, the father of the present Earl, lawyer, durable, represented as a prosecutor France at the Nuremberg trials. He worked for the creation of the European Union and was justice minister under de Gaulle. In 2008, for the alleged millennium of the birth of Bernard of Menthon, commemorative events were organized.