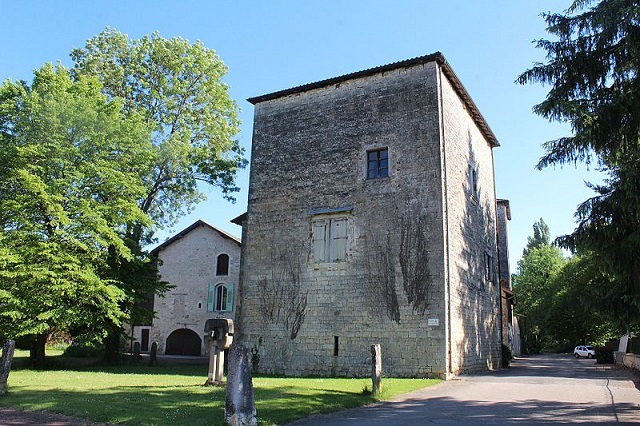 Location: Meillonnas, in the Ain departement of France (Rhone-Alpes Region).
Built: 1350.
Condition: --.
Ownership / Access: Private person.
Notes: The castle of Meillonnas is a former castle of the fourteenth century, several times remodeled, center of the lordship of Meillonas, which stands on the town of Meillonnas in the department of Ain in Auvergne-Rhone-Alps. The castle, partly owned by the commune, is not open to the public, but it is possible for specialists to visit it. The whole castle and the parcels on which it is situated, as well as the adjacent plots and the former place "le pré aux fosses" are registered as historic monuments by decree of 4 July 2007.The seigniory of Meillonnas was first the possession of the lords of Coligny until the first years of the thirteenth century, then it passed successively to the lords of the Tour-du-Pin, the dolphins of Viennois, the palatine counts of Burgundy, and then, in 1289, to the Count of Savoy Amede V. About 1325, Edward, Count of Savoy, gave it to Humbert de Corgenon, bailiff of Bresse, who passed it on to Humbert, his second son, About 1350, and obtained concession of high, medium, and low justice. Jean de Corgenon, living in 1380, left only two daughters. The lordship of Meillonnas fell to the eldest, Aimée, the wife of Urbain de la Chambre, whom she had Claude de La Chambre, father of Bonne de la Chambre, who bore Meillonnas in marriage to Philibert de Seyssel, lord of Aix. Philibert de Seyssel transmitted his seigniory to his two sons, Gabriel and Louis de Seyssel, who possessed it for some time undivided, and in 1460 received the right to erect four-pillar pyramidal forks. Francoise de La Chambre, the wife of Gabriel de Seyssel, who remained sole lord of Meillonnas, received the succession of Francois-Philibert de Seyssel, his son, who died young, and left her by his will of 21 November 1529 to Charles de la Chambre , His nephew, "to bear the name and the pure weapons of Seyssel. The land of Meillonnas remained in the family of the Seyssel House until January 22, 1740, when Victor Amé de Seyssel Asinari sold it for 61,900 livres to Nicolas de Marron, equerry. The resumption of the castle and the title by his nephew Gaspard Constant Hugues de Marron will open a new page of history for Meillonnas. This family still enjoyed it, in title of barony, at the convocation of the States-General. The castle will be the seat of a "factory in fayance" which will make known very far the village of Meillonnas.From the castle built from 1350 there remain many traces: three towers, walls ... and the church itself built leaning on a tower. The castle, before the Revolution, then included six towers, as well as numerous outbuildings. The building has murals from the fifteenth to sixteenth centuries.