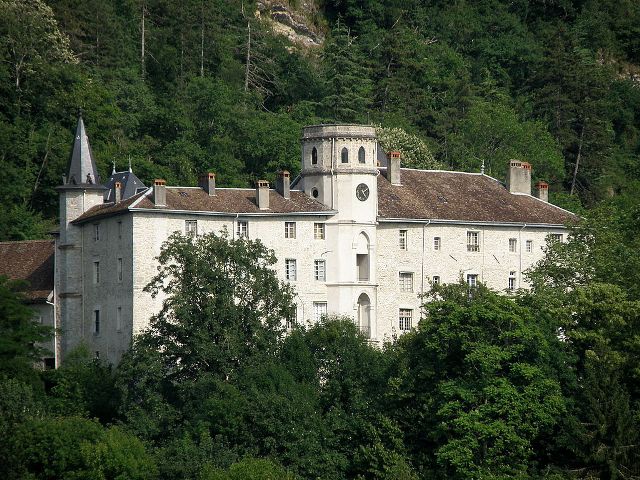 Location: Lucey, in the Savoie departement of France (Rhone-Alpes Region).
Built: 13th century.
Condition: In good condition.
Ownership / Access: Winery.
Notes: Château de Lucey formerly Loyssey or Castle Boigne is a former stronghold of the thirteenth century, much altered in the nineteenth century, the center of the Lordship of Lucey and the barony (1563) and finally the marquis (1654) Lucey, who stands on the steps of the small Bugey Savoyard, in the municipality of Lucey in the department of Savoie, in region Auvergne-Rhône-Alpes. Around 1920, a descendant of General sold the castle to Jean-Baptiste Morel, Isère and industrial archaeologist. He then Madame de Camaret, his daughter, whose descendants still own. Château de Lucey was badly mutilated in the Revolution découronna of the two towers and partly ruined. The upper parts of the current building were heavily reworked in the first half of the nineteenth. The front building of modern style, built in the Renaissance style, is due to Ernest Boigne colonel; he affixed above the door a shield to his arms. Inside, the rooms feature a decorative mural paintings from the seventeenth. All that remains of the medieval castle a small part of the south facade. Complete this set near the entrance porch, a waterfall, which was part of the defenses and then served to actuate several mills. On the castle site were found several objects that were rated on 1 March 1941. An altar of iiie dedicated to Mithras, a fragment of the funeral plaque "Q. Carminius Bellicus" and a Gallo-Roman weight with a iron ring lead and bearing a dedication to Mercury.

How To Get To Château de Lucey (Map):