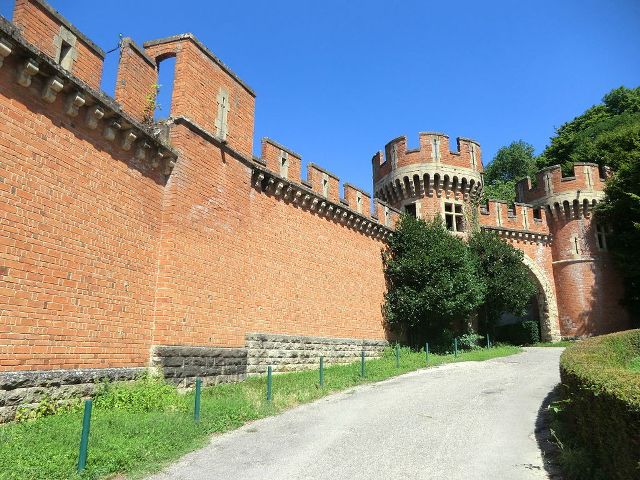 Location: Villieu-Loyes-Mollon, in the Ain departement of France (Rhone-Alpes Region).
Built: 19th century.
Condition: In good condition.
Ownership / Access: Privately owned.
ISMH Reference Number: PA01000030
Notes: Château de Loyes is a castle of the eighteenth century high Gabriel Dervieu Villieu, Baron Loyes, and subsequently amended for Baboin family, which stands on the town of Villieu-Loyes-Mollon in the department of Ain in region Auvergne-Rhône-Alpes. He succeeded an old castle high on the eleventh century motte and a strong house, center of the Lordship of Loyes, called castle Pie; remains only the mound. The facades and roofs: the castle, common, chapel located outside; the enclosure and the neo-Gothic portal, the formal garden, the park, the castle mound, the gazebo deck, the garden with its closing; the plots of the field are the subject of a registration as a historic monument by decree of 28 March 2008. At the rear, a park was made by a Lenôtre successor after a drawing by André Le Nôtre, as reported in a tradition dating back to the nineteenth century. It includes part of the French traveled by large straight paths, an English-modified part of the nineteenth century adorned with a basin. The main species that meet there are lime trees, chestnut trees and cedars. A stone bridge crossing the old road from Geneva provides access to the vegetable garden through a path supported by ancient arcades used aviaries in the nineteenth century. The development of the park also made it necessary to cross the Poype, a significant portion is still accessible from the castle grounds.