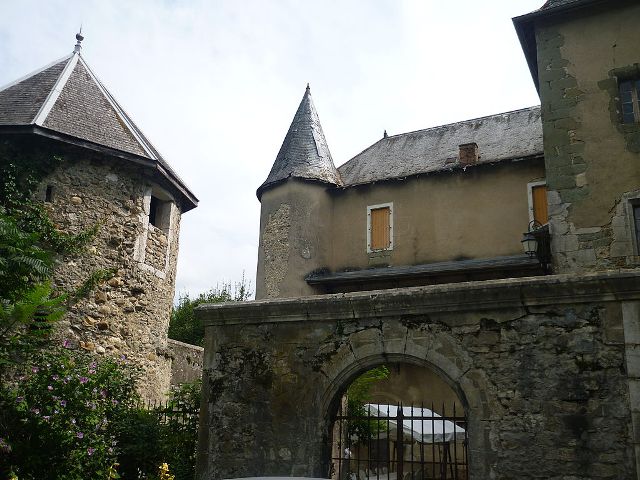 Location: Lornay, in the Haute-Savoie departement of France (Rhone-Alpes Region).
Built: 13th century.
Condition: In good condition.
Ownership / Access: Privately owned.
Notes: Château de Lornay is a former stronghold of the early thirteenth century, restored in the nineteenth century, which stands in the municipality of Lornay a French commune in the Haute-Savoie department in Auvergne-Rhône-Alpes region. Owned by the family of Menthon in the thirteenth century, it is given in 1371 by Thomas Menthon his fourth son, Henri de Menthon, who will give birth to the branch of Menthon Lornay. It will remain in that branch until the Revolution. Are lords of Lornay Guillaume Lornay in 1300, Jean Lornay in 1333. At the end of the fourteenth century, it is the possession of another Lornay William, bishop of Geneva. then falls Philippe Lornay, Petremont Lornay in 1475, Nicolas Lornay in 1536, the Reverend Francis Lornay in 1608, dean of the collegiate church of Annecy, Christophe Lornay in 1610, Humbert Lornay in 1615, Claude Lornay in 1626, the Lornay Claude baron in 1715, commander of the duchy of Savoy, a colonel in the Sardinian army lieutenant general in 1739 and the King of Sardinia. Sold as national property, Claude-François Bastian, bought it in 1796. It was restored in 1867 by Bastian Knight, Mayor of Frangy. Today is the center of a farm.The castle is protected to the north and west by a natural moat. It is accessed by a small bridge above a massive gate defended by two deadly. The main building is arranged bracket that are flanked two rounds. The façade overlooking the Fier, is pierced by three rows of windows.