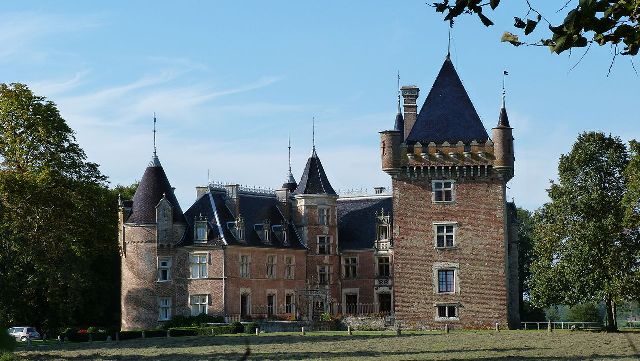 Location: Confrançon, in the Ain departement of France (Rhone-Alpes Region).
Built: 19th century.
Condition: In good condition.
Ownership / Access: Privately owned.
ISMH Reference Number: PA00132808
Notes: Château de Loriol is an ancient castle, the first half of the fourteenth century, rebuilt in 1860 by Charles Martin, center of the lordship of Asnieres Woods, which stands on the town of Confrançon in the Ain department region Auvergne-Rhône-Alpes. It probably replaced an original building from the late eleventh century. Castle Loriol is located in the French department of Ain in the town of Confrançon, 2.5 kilometers northwest of the town, in western edge of the county road 26 connecting Mézériat in Saint-Didier Aussiat. Loriol The castle presents the twenty-first century as a home in square whose corners are flanked by round turrets, which rests on a large square tower. This dungeon, probably dating from the fourteenth century, its top crowned with battlements and circular pepper shakers in the corners.

How To Get To Château de Loriol (Map):