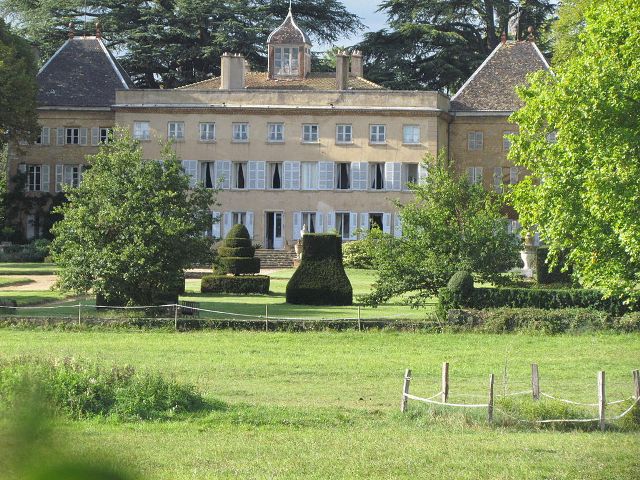 Location: Arnas, in the Rhône departement of France (Rhone-Alpes Region).
Built: 17th-18th century.
Condition: In good condition.
Ownership / Access: Owned by a private company.
ISMH Reference Number: PA69000035
Notes: Château de Longsard is located in the village of Arnas, in the Rhône department. If the domain Longsard appears from the early 17th century, the property was built in the second half of the 18th century by Jean-Charles Marie de Brun, adviser to the king and master of Forestry in the province of Beaujolais. In 1780, the owner is Lord Pierre Verd de Longsard. Victor de Saint Amand, general farmer acquires the property and did make a plan in 1792 by Mr. Gilbert, surveyor. He will die guillotined on January 31, 1794. The property passed in 1835 to Pollalion family, Viscount Glavenas. It comprises 220 hectares at that time many vineyards. Monsieur Pollalion became mayor of Arnas and prominent member of the Horticultural Society of Lyon where he was one of the creators. The property consisted of five farms, where he introduces modern methods of cultivation. It makes changes in the castle on the outside, fitting blinds and replacing 18th-paned windows (of which there remain few). The interior refurbishment of the dining room with its wood paneling and wallpaper, and laying in the entrance of an Italian mosaic depicting the image of the Pollalion family. In 1891, Count and Countess Paul Fleurieu bought the castle remained in the family until August 1997. The current owners are the Olivier Count and Countess Alexandra du Mesnil du Buisson, multilingual and international, who lived nearly twenty years in countries as diverse as Nigeria, Spain, Brazil, England and the USA. The monument is the subject of a registration as a historic monument since November 5, 2007.

How To Get To Château de Longsard (Map):