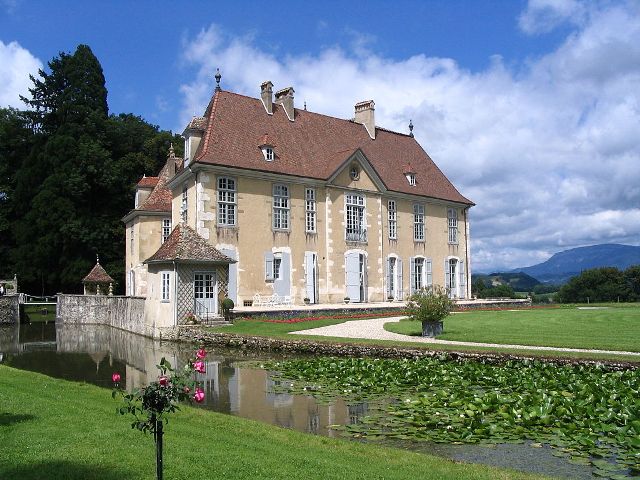 Location: Saint-Geoire-en-Valdaine, in the Isère departement of France (Rhone-Alpes Region).
Built: 14th century.
Condition: In good condition.
Ownership / Access: Private property.
ISMH Reference Number: PA00117250
Notes: Château de Longpra is a former stronghold of the fourteenth century completely revised in 1770, which stands in the municipality of Saint-Geoire-en-Valdaine in the Isère department in Auvergne region Rhône-Alpes. Under the monument, castle, terraces and south pit, pavilions, moats, the courtyard with its gates and walls, the common roofs and facades as well as the wide avenue leading to the castle are the subject of a classification by order of 25 August 1997, the castle park is the subject of a partial registration by order of 25 August 1997.Built in the twelfth century, the castle throughout its history changed many times in the face, and can account for a part of history and architecture in this region of the Dauphiné. Originally, the building was a strong house as found much in the Dauphine; over thirty, all built before 1300. From that time there remains the moat of 378 meters in length and remains of the old drawbridge; the current bridge dates from the seventeenth century. In the eighteenth century, Pierre-Antoine Longpra, counselor to the parliament of Dauphine, shaves the old fortress and rebuilt from the likes of this century, in order to obtain an approval residence. It is in this guise that we can now discover the castle Longpra. Since 1536, the castle belongs to the family and Franclieu today the Count and Countess Franclieu Albert manages the home and visiting the area.Its reconstruction allows us to see and discover the Dauphiné architecture eighteenth century and townhouse noble symmetrical facades that was born in the decades following the end of the religious wars honoring since the late seventeenth century a new style reducing the decoration of facades to confine them in frontons6. Many artisans from the village of Saint-Geoire worked in its work, but the most notable presence during this transformation of the old fortress is one of the Hache family who signed the floor of the house.