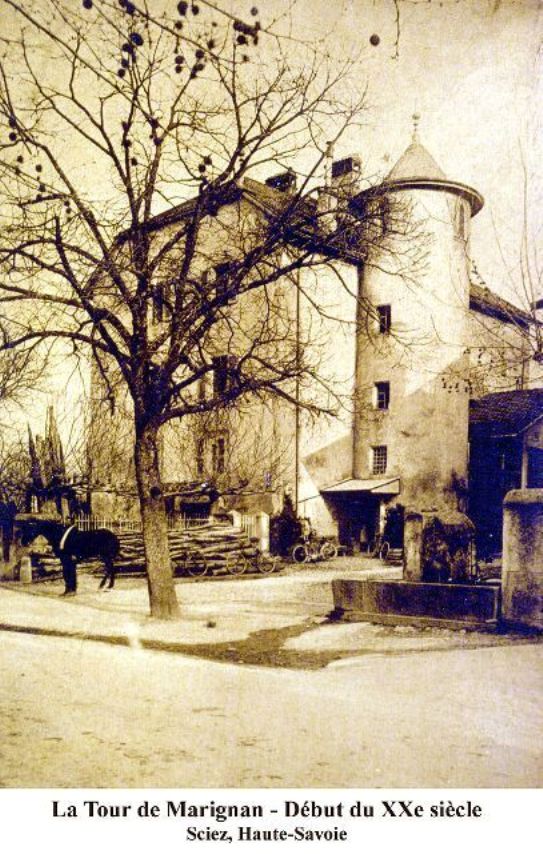 Location: Sciez, in the Haute-Savoie departement of France (Rhone-Alpes Region).
Built: 13th century.
Condition: Ruins.
Ownership / Access: Privately owned.
Notes: Château de la Tour de Marignan is located in Upper Saw Savoie. Dates from thirteenth to the sixteenth century, the fate of the Tour de Marignan is closely linked to that of the Abbey of Filly. Towards the middle of the eleventh century as a result of a land grant made to a Tibold, canon of the said abbey, a priory of the Order of St Augustine was founded on the banks of Vion, about 800 meters north of the village of Filly. This priory rapidly growing in importance and in the second half of the twelfth century, he received the abbey dependent status of the Bishop of Geneva. September 9, 1250, a bull of Pope Innocent IV submits to the abbey parishes Saw, Chavannex, Excenevex, Yvoire, Burdignin, etc. (E. Berger, Registers of Innocent IV, No. 4819). Therefore, the Abbey of Filly experiencing a considerable increase in his wealth and influence, to the point of dominating the local life but not without constant clashes with the other power of the place, the family of Allinges-Coudrée. The enrichment of the abbey comes from the collection of tithes, feudal dues and donations, but also the purchase of rights or land. The "Tour de Marignan" is one of those purchases. It is in 1258 that the abbot of Filly buys Rovorée Jean (Jehan Ravorea), with 160 pounds Geneva, the albergement of Marignens. This is a "fortified house" and land dependent on it. This fortified house is actually a walled cellar. From top to bottom, only loopholes and some narrow barred windows pierce the thick wall of 1.60 meters. This is to protect the production of the field of lust passing soldiers: the wine cellar and other crops in the story. At that time, the majority of farmers vineyard parcel - use that will continue until mid-twentieth century. Now own Marignan Filly of the monks there will develop the culture of the existing vineyard. Ecological conditions of the location (soil type, exposure, etc.) are very friendly and the wine is for the monks, a key generation for religious and economic reasons. Among their other possessions, Marignan becomes, the monks of Filly, the main place for wine production. They have their press and their cellar. From the mid-fifteenth century, the Abbey of Filly began a decline; but his fall is brutal, in January 1536, with the invasion and occupation of Chablais by Calvinists Oberland. The Bernese sell part of the Abbey of property, including the "field" of Marignan on 1 March 1547.