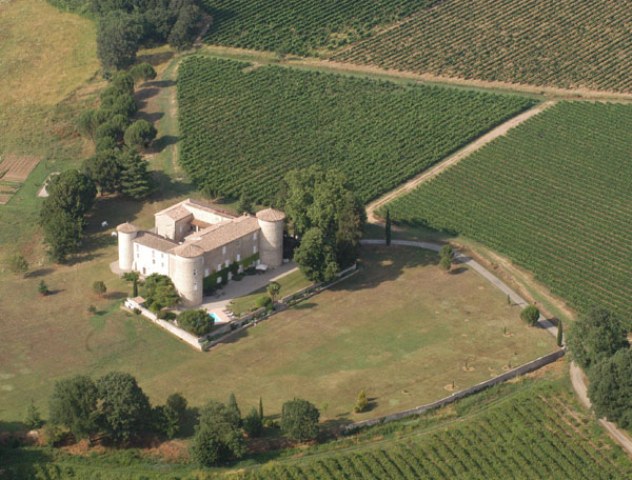 Location: Grospierres, in the Ardèche departement of France (Rhone-Alpes Region).
Built: 13th century.
Condition: In good condition.
Ownership / Access: Winery.
Notes: The Château de la Selve is a French château located in Grospierres Ardeche. The Château de la Selve was originally a fortified house on the borders of the kingdom of France. He was then the hunting lodge of an illustrious family of the Vivarais, the Dukes of Joyeuse, before becoming the centuries a farm. Located on the banks of the Chassezac, the main tributary of the Ardèche, it enjoys an exceptional and protected environment. Today, the castle belongs to the Chazallon family, which owns a vineyard of 38 hectares in organic and biodynamic led by Benedict Chazallon. Dating back to the thirteenth century, its architecture is typical of houses or castles that are found in Lower Vivarais in Provence. This is the style of the great mansions that will cross the centuries even after the Renaissance. It is isolated buildings, with a courtyard, the facade is flanked by four corner towers. The fortification of cottages is a very ancient practice. It is found, from the early Middle Ages, the castle Castellum whose resumes the plan with corner towers. It is a Roman heritage since many villae rusticae were protected by towers. Selve Castle offers two wine ranges: Confidential and The Classics Confidential, from a selection of the finest vintages, are composed of a red, Florence, rosé The bold and white, Madame. The Classics have three red, Serre de Berty, Beaulieu and Palissaire, a rosé and a white Maguelonne Saint Regis.