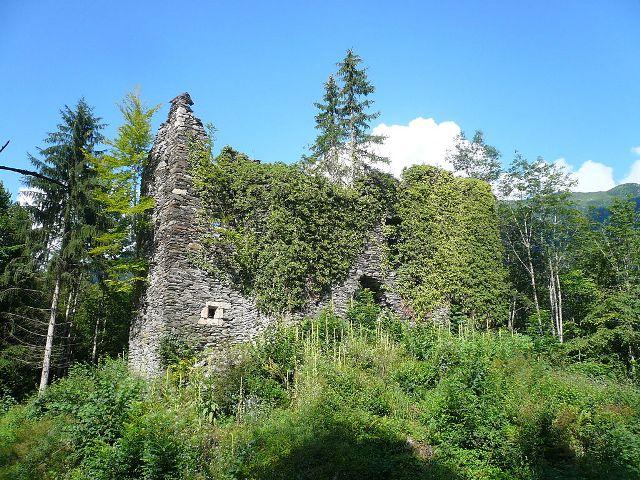 Location: Beaufort, in the Savoie departement of France (Rhone-Alpes Region).
Built: 13th century.
Condition: Ruins.
Ownership / Access: --
Notes: Château de La Sallaz or château de la Grande-Salle is a former stronghold of the thirteenth century, the ruins stand in the town of Beaufort in the Savoie region in Auvergne-Rhône-Alpes. The stronghold is in the form of a massive tower room of the late thirteenth century almost square plan of 14.50 × 15.50 meters wide with walls 1.20 meters thick, flanked on its western side, a square tower of 4 meters wide, high about 18 to 20 meters, which had four floors, each lit by a tiny window to the south. Its flat shape vaulted summit was surrounded by a crenellated parapet. The stately, top two floors on the ground floor, had an underground room which served as a prison. On the ground floor, which opened on the south side by a door arch, there was a large room of 12 × 7.50 meters, with fireplace, lit by three windows and two other rooms smaller dimensions. It was the same layout on the first floor. On the second floor, one room occupied the entire space.