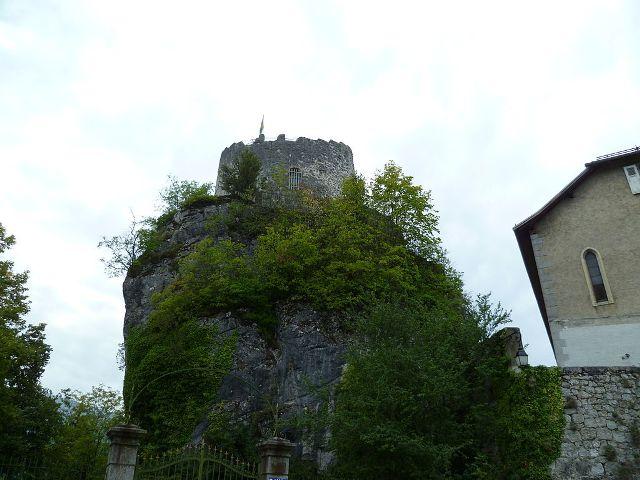 Location: La Roche-sur-Foron, in the Haute-Savoie departement of France (Rhone-Alpes Region).
Built: 11th century.
Condition: Ruins.
Ownership / Access: --
ISMH Reference Number: PA00118424
Notes: The Château de La Roche-sur-Foron is the last vestige of an ancient castle of the thirteenth century, which stands in the municipality of La Roche-sur-Foron in the department of Haute-Savoie, in Auvergne-Rhône-Alpes region . This tower was probably built in the second quarter of the thirteenth century, was actually the tower of the fortress. This is one of the first circular towers built in Savoy. This new architecture then constituted an important advance because it suppressed blind spots. Fine examples of this type of military architecture exist in Savoie, including Thorens Castle, a few kilometers from La Roche-sur-Foron. The isolated circular tower mistress of the counts of Geneva is built astride the natural fault of a very imposing rock. This erratic carried by Mont Blanc glacier was placed there about 10 000 years ago, when the ice melted. This flaw was walled out by the builder of the tower; the latter further group within four superimposed forming natural caves. Above the rock, the keep itself consisted of three floors. Since the late nineteenth century, following the work of the Capuchin monks of La Roche, owners of the tower at that time we cross the rock from side to side: we can therefore believe that there are two rocks so that it's the same. From the castle there are only a few walls. The dungeon, standing in the second half of the thirteenth century, is perched on a rock 17 meters high; the tower on it more as 11 meters high twenties she probably originally measured and thick walls of almost 4 meters thick. It accola him after a home, making this set a "dungeon", without changing its access which was high. Castle enjoyed innovations carried on pregnant and endowed the fortress of a wall-shield an angle of 140 °.