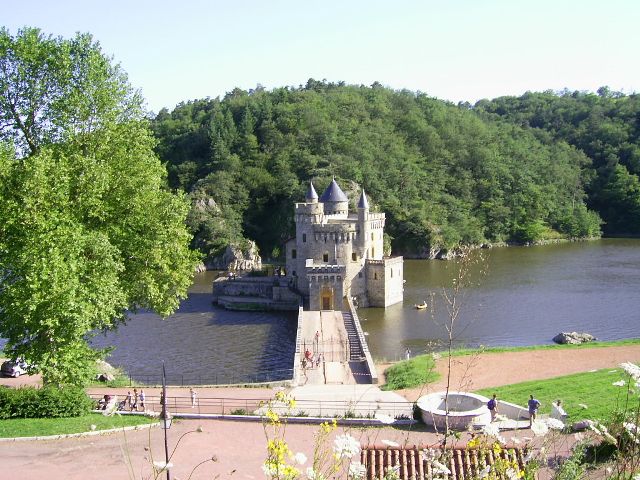 Location: Saint-Priest-la-Roche, in the Loire departement of France (Rhone-Alpes Region).
Built: 12th century.
Condition: In good condition.
Ownership / Access: --
Notes: The Château de La Roche is located on Lake Villerest in the town of Saint-Priest-la-Roche (Loire department), 20 km from Roanne. The first writings of the castle date back to 1260. It was built on a rocky outcrop overlooking the Loire to over 40 meters. This fortification ensured a point to watch and pay for the border of Drill County. But the building had more time to suffer the floods of the Loire an enemy attack. In the seventeenth century to repetitive floods force, the castle lost its attractions, resembling more a fortified house to become a ruin centuries later. In the early 1900s an industrial Roanne bought the castle and restored it in the Gothic style, to make his second home. In the 1930s, the construction of the Villerest dam EDF condemns the castle to disappear under water. EDF acquired in 1965 but the castle is deteriorating so rapidly with widespread looting. It was finally bought in 1993 for a symbolic one franc by the municipality of Saint-Priest. During the commissioning of the dam Avril1984, the castle will be the only building spared by the flood. It is now located on an island. In 1996, the castle was completely restored and the water side of the dam is revised downwards to allow access to the castle throughout the year. Regulation over the Loire still does not prevent the castle remain flooded: it was also hit by floods in 2003 and 2008.