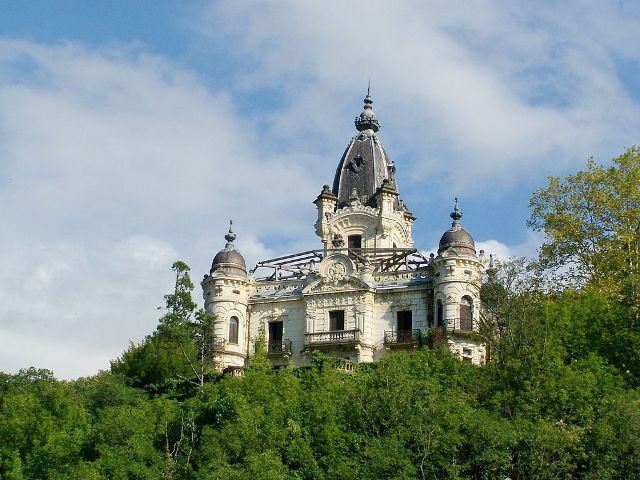 Location: Aix-les-Bains, in the Savoie departement of France (Rhone-Alpes Region).
Built: 19th century.
Condition: In good condition.
Ownership / Access: Privately owned.
ISMH Reference Number: PA00118165
Notes: Château de la Roche du Roi is a chateau in France in the town of Aix-les-Bains in the Savoie region in Auvergne-Rhône-Alpes. Built in the late nineteenth century, the castle is the subject of a classification as historical monuments since 23 April 1986.Construction of the castle began in 1897 and ended in 1900 by the city architect Jules Pine (elder) and by the company Léon Grosse. It cost 496 000 francs at the time. During 1982, a foreign buyer wanted to buy the castle and the dismantle stone by stone to make it back completely in his country. The proposal for the less unusual was the subject of several articles in the local press and was confirmed by the then owner of the castle which was Gilbert Duranton. In 1983, the building is registered with the additional inventory of historic monuments. This allowed the administration to have a say in all types of work. Three years later, in 1986, the castle is a listed building.During 1998, the building became the property of a German who bought 4.5 million francs. This purchase does not profit the radiation of the building. Indeed the owner leaves the castle abandoned. During the past decade, the building has undergone various damage. In 2003, a storm swept the roof. At the same time, the monument became a squat. In view of these inconveniences, the city launches unfitness. In the aftermath, as an anecdote, in 2005, an MK2 grenade from the Second World War was discovered in the basement of the castle. In 2007, an expropriation procedure was initiated against the owner. He refuses to undertake any renovation of the property continued to fall into disuse. At the same time, the owner is selling the building. The sale ends up being, the building is now being renovated.The castle of la Roche was built in the nineteenth century in an architectural style that is a mix between oriental palaces and Renaissance castles. It is built on a terrace supported by semicircular vaulted basements. its total surface area is 500 m2. It is baroque, although the different influences mingled, strongly influenced Art Nouveau to determine an original "Aix style", this castle is ultimately unique. The castle of la Roche, its terrace and the stairs, his cage and wrought iron railing, the dining room and the adjoining room on the ground floor and two bedrooms on the first floor were classified monument history April 23, 1986.