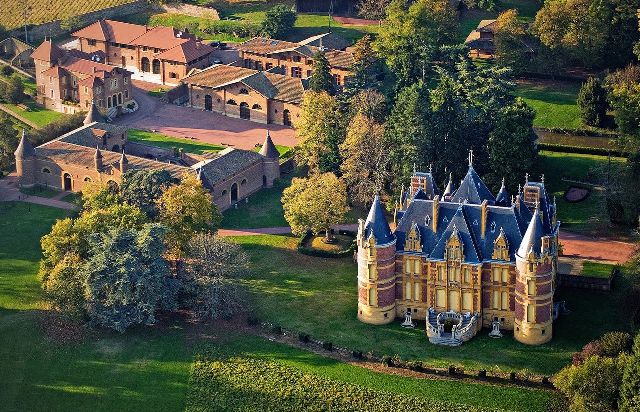 Location: Saint-Vérand, in the Rhône departement of France (Rhone-Alpes Region).
Built: 19th century.
Condition: In good condition.
Ownership / Access: Owned by a private company.
ISMH Reference Number: PA00118062
Notes: Château de la Flachère is located in the municipality of Saint-Vérand in the Rhône, standing on a hill at the confluence of the Azergues and Soannan.The current castle was rebuilt between 1863 and 1867. The plans were drawn by architect Eugène Viollet-le-Duc and all was finished in 1875. The building is brick and stone and slate roofs are . It is equipped with a staircase and richly decorated rooms, including large living room, dining room, billiard room, the music room, the large and the small library, the old kitchen into sub basement with fireplace. It also includes many large outbuildings farms, control room, stables. The park was designed by Varey that, at the request of the Marquis of Chaponay, he planted rare species. Several elements have been classified as historic monuments, the castle and inside the grand staircase with its stone ramp and its cage, the private staircase to the front turret, large living room, eat, the billiard room, the music room, the large and the small library and the old kitchen in the basement with fireplace. For their part, the common, the flag of the governed and the stables with their stalls and racks were enrolled.